ANOTHER SATURDAY NIGHT, ANOTHER WIN FOR STEWART FRIESEN AT FONDA 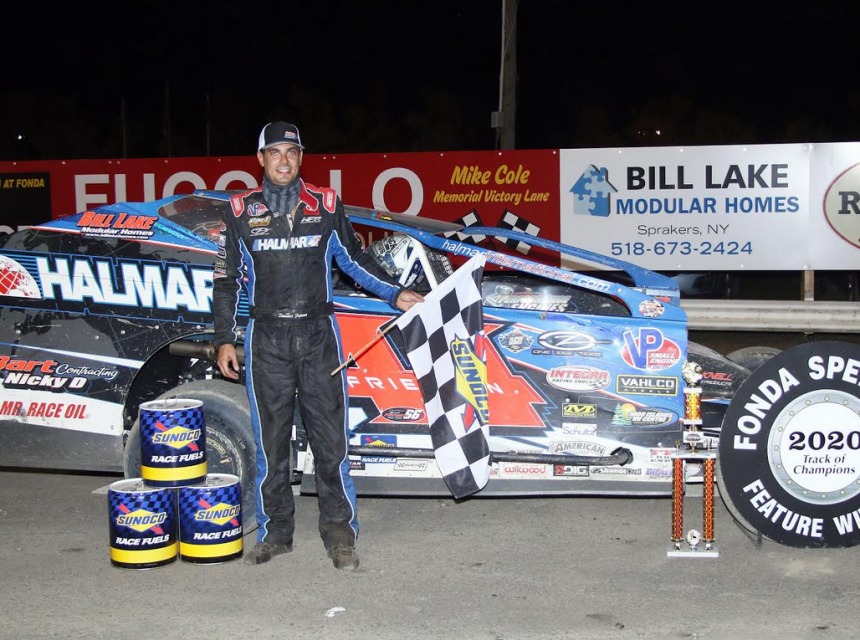 Fonda, NY – Stewart Friesen made another visit to the “Track of Champions” Fonda Speedway on Saturday evening and just as he did five other times this season ended up in the Fuccillo Automotive Group Mike Cole Memorial Victory Lane. After Saturday evenings racing program, Friesen has won six out of seven events at Fonda in 2020.

The race at Fonda on Saturday was the 1375th Modified event held in the history of the “Track of Champions” with Friesen now fourth on the Modified All Time Win List with 66 victories in just 10 winning seasons, passing Bobby Varin for the spot on the win list after Saturday evenings victory which was worth $3,000 after a Dedicated Race Fan of the Fonda Speedway boosted the winners share in the event.

Other Dedicated Race Fan Bonuses handed out on Saturday evening were $100 to the fifth, 10th, and 15th place finishers in both the Sunoco Modified and Algonkin Motel Pro Stock feature events. Those bonuses were collected by David Schilling (fifth), Roger Henion Jr. (10th), and Ricky Davis III (15th) in the Sunoco Modified feature and Rich Crane (fifth), David Emigh (10th), and Andy Graves (15th) in the Algonkin Pro Stock feature.

Uncle Harry’s Smokehouse also paid out a $50 bonus to the overall winner of the Four Cylinder Cruiser feature which was won by Cole Lawton.

Mimi Lazzaro sang the National Anthem before the racing action started which was streamed live by Dirt Track Digest TV who did a fantastic job with the coverage as the grandstand and infield were again closed due to New York State regulations.

The 30-lap Sunoco Modified feature began with Roger Henion Jr. as the early leader after Joe Kriss dropped the green flag on the event. Fourth place starter Dave Constantino took the lead away from Henion Jr. with a pass on the outside of turns three and four on lap three just before the red flag flew on lap four for a multi car pileup in turn two.

The wreck began when David Schilling got into the rear of Henion Jr. and got out of shape with many cars piling in as the track was blocked by the melee. Involved were point leader and defending Sunoco Modified Track Champion Rocky Warner, Danny Varin, Josh Hohenforst, and Scott Huber among others with Varin’s car ending up on top of the front end of Warner’s car.

Amazingly Warner was able to drive away to the hot pit area to make repairs and continue at the rear of the field. No drivers were injured in the jarring wreck.

Just after the race was restarted the red flag was out again, this time for Darwin Greene who was in the turn four wall by the Cow Palace. Greene was not injured but was done for the evening after the crash.

Constantino maintained the lead on the restart with Michael Maresca the new second place car. Maresca actually got by Constantino for the lead on lap seven at the finish line to complete the lap but Constantino was back in the lead as the cars went down the backstretch as he was able to get back by Maresca for the point.

Stewart Friesen started the event in the 12th position and by lap 10 had gotten by Schilling for the third position, making it a three-way battle for the lead between Constantino, Maresca, and Friesen. On the outside of turns one and two at the halfway point in the event, Maresca passed Constantino for the lead but that only lasted one lap as Friesen got by both for the lead one lap later.

But there was another Friesen who was having a great run in the feature after starting alongside her husband in row six, Jessica Friesen who was in the top five when her husband Stewart took the lead. As Stewart pulled away to yet another victory, all attention was on Jessica who picked off cars one by one to get into the second position on lap 21 after getting by Maresca.

That is how they would finish at the drop of the checkered flag with Stewart taking the win in the Halmar #44 Bicknell car while Jessica settled for second in the One Zee Tees #1Z Bicknell car. Maresca, Constantino, and Schilling completed the top five.

“It’s been a good run for us in July and hopefully we can keep it going,” Stewart Friesen said in victory lane as his son Parker celebrated on the roof of the race car. “First and second for the team is great, we had some motor issues with Jessica’s car but were able to straighten it out.”

“The track was good, its been different every week, tonight it blew off and slicked up more than I thought it would,” Friesen continued to say. “I love it here at Fonda, and I’m looking forward to when we can have fans in the stands again.”

Mimi Lazzaro announced that she is starting a bounty on Stewart Friesen starting with the race on Wednesday, August 5. She put up $100 to start and anyone can join in by getting in touch with her on Facebook.

The 25-lap Swagger Factory Apparel Crate 602 Sportsman feature began with Brendan Gibbons leading from his outside pole position start with division rookie Michael McCallion in tow. Brian Borst started the event in the fifth position, was up to third on lap two, and three laps after that he was the new race leader after getting by both McCallion and Gibbons.

Defending Swagger Factory Apparel Crate 602 Track Champion Tim Hartman Jr. started the event in the eighth position and by lap five was in the second position with seventh place starter Brian Calabrese just behind in third. Borst was in lap traffic by lap 13 with the one and only caution out one lap later for Kevin Chaffee who was in the turn four wall. He was not injured in the accident.

Borst continued to lead on the restart with Hartman Jr. trying to find a way by for the lead. On lap nine Hartman Jr. made his move on the outside of turn four to take the lead in the event and from that point on he led the remaining laps for his first win of the 2020 season and the 12th of his career in the division over Calabrese, Borst, 11th place starter Joe Williams, and 12th place starter Chad Edwards.

“This is just a relief,” Hartman Jr. said in victory lane after exiting the Parillo Services #22 car. “I’ve been struggling here at Fonda but have done well everywhere else. We found something with the car recently and went to Lebanon Valley and won so I was hoping it would work here and it did. I feel like this is my first career win again because we’ve been struggling so badly.”

Cody Clark was the winner of the Greco’s NAPA Hard Charger Award after advancing from his 24th starting position to finish 10th.

Harold Robitaille led at the start of the 20-lap Montgomery County Office for Aging Inc. Limited Sportsman feature from his outside front row starting position. By lap four Robitaille held a straightway lead with Stephen Gray closing in on the leader at the halfway point. Gray got the lead on lap 11 with a pass on the inside of the backstretch with sixth place starter Carter Gibbons the new second place car after he also got by Robitaille with five laps to go.

Tenth place starter Brett Mortensen was in the fourth position at that point and with only two laps to go got by Gibbons for the second position. Gray went on to win by a straightaway for his first career win in the division over Mortensen, Gibbons, eighth place starter Dylan Eldred, and ninth place starter Johnny Young.

Andy Graves was the early leader in the 20-lap Algonkin Motel Pro Stock feature after starting on the pole with Beau Ballard in the second position after starting third. Graves and Ballard were side by side for the lead on lap four with Ballard able to get the lead away on the inside of turns one and two on lap five.

With three and four wide action throughout the field it was an exciting event with the first caution coming out on lap six with Luke Horning out of the event at that point while running in a top five position. Jim Normoyle was the new leader on the restart with 12th place starter Nick Stone in the top five by lap seven.

The final yellow of the event was out on lap 10 for Graves who did a slow roll on to his roof in turn two. He was not injured in the wreck with Normoyle, leading on the restart while Stone advanced to the second position. Using the inside groove in between turns three and four, Stone took the lead away and went on to his fifth win of the season and the 51st win of his career at Fonda, tying him with Todd Hoffman for the second position on the All Time Win List in the division. Seventh place starter Kenny Gates, Normoyle, Ballard, and 11th place starter Rich Crane completed the top five in the feature event.

“This car is so much better here at Fonda then it is anywhere else,” Stone told Mimi Lazzaro in victory lane. “I was just trying to be patient in the beginning with all the three and four wide action going on but once everyone fanned out it was okay. Each week everyone is getting better and better and once they catch up; we will have to make some adjustments to the car as well but right now we are right where we want to be.”

Dave Horning Sr. led the first three laps of the Robert’s Towing & Recovery Street Stock feature until defending track champion Jason Samrov took over the lead on lap four with a pass on the inside of turn four. Samrov went on to his second win of the season and the 15th of his career in the division over Zach Sorrentino, Al Relyea, Lou Gancarz, and Horning Sr.

Ken Hollenback went from the 11th starting position to the lead by the time lap one was completed in the Four Cylinder Cruiser feature with two cautions slowing the 15-lap event. With three laps to go, 14th place starter Cole Lawton was the new second place car and on lap 14 Lawton got by Hollenback for the lead and went on to his first win of the season in the DOHC class while Ken Hollenback was the first SOHC car across the line.

On Wednesday, August 5 the Fonda Speedway will be back in action with a racing program called the 7 come 11 Special sponsored by Moody Mile Motorsports and Dirt Track Digest. In competition on Wednesday will be the Sunoco Modifieds competing for $3,711 to win in a 30-lap event, the Swagger Factory Apparel Crate 602 Sportsman in a 25-lap $1,000 to win event and the Algonkin Motel Pro Stocks in a 20-lap event for $1,000 to win. The racing program will be broadcast exclusively on Dirt Track Digest TV with race time at 7:15 p.m.