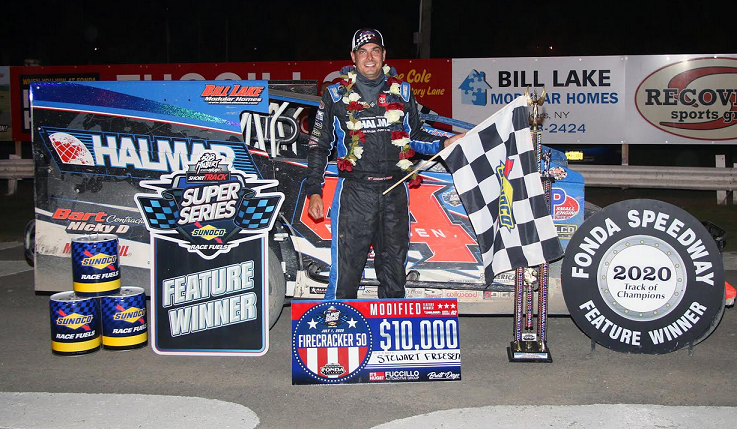 Fonda, NY – After being rained out this past Wednesday evening, the Bob Hilbert Sportswear Short Track Super Series (STSS) was in action on Sunday evening at the “Track of Champions” Fonda Speedway. Both the STSS North Region Modifieds and Sportsman were in action with a big payout in both divisions.

The event was the first major touring series event in New York State since the COVID-19 pandemic.

The Fuccillo Automotive Group presented the racing activities for the evening with fans allowed in the grandstands following guidelines including social distancing and wearing masks as well. A big crowd also took advantage of the infield drive-in section to watch the exciting racing events.

When the racing program was concluded Stewart Friesen was the winner of the $10,000 Firecracker 50 while Chad Edwards was the winner of the $2,000 Sportsman main event. For Friesen it was his fourth victory of the season at Fonda, raising his career total at the track to 64 just one behind Bobby Varin for fifth on the all-time win list. Friesen is first on the STSS Modified win list with 23, with a total of 30 different winners in 89 events according to STSS history.

The win for Friesen was also his 11th in events of 50-laps and over at Fonda, which ties him for fifth place on that win list with Mike Romano.

For Edwards it was his second victory of the season at Fonda bringing his win total in the division to nine which is seventh on the all-time win list in the Swagger Factory Apparel Crate 602 Sportsman division at Fonda. Edwards is now the 32nd different driver in 43 events in STSS history to win a feature in the series.

STSS announcer Jeff Ahlum and DTD’s Mike Mallett announced the evenings action at the track and DTD TV broadcast the racing live on pay per view to the fans who could not attend.

Cipperly Agency, which is the local Farmers Insurance agent, was the intermission sponsor with prizes handed out to the fans in the grandstands.

After a redraw to determine starting positions in the Firecracker 50 and a four-wide salute to the fans, Michael Maresca and Sunoco Modified Rookie Adam McAuliffe started the event on the front row with Maresca the early leader. McAuliffe hung tough on the outside however and by the time lap one was completed he was the race leader.

McAuliffe held a straightaway advantage over Maresca by lap five with fifth place starter Stewart Friesen making moves to the front early, taking the third position away from Matt DeLorenzo on lap six and one lap later the second position away from Maresca. At that point McAuliffe held a three second advantage but lap after lap Friesen cut into it and by lap 10 it was down to 1.5 seconds.

On the inside of turn four coming down to complete lap 13, Friesen got by McAuliffe for the lead, but McAuliffe kept pace with Friesen with the caution out on lap 15 for Danny Varin who suffered a flat left rear tire. Friesen chose the inside for the restart and maintained the lead over McAuliffe with ninth place starter Larry Wight moving up to fifth on the restart using the extreme outside line to get to the front.

At the halfway point in the event, Friesen held a straightaway advantage over McAuliffe, Maresca, Wight, and DeLorenzo with the yellow out on lap 26 for Billy Decker who slowed in turn two with a right rear flat, nearly collecting Matt Sheppard who made contact with Decker but was able to continue on in the sixth spot.

Friesen led on the restart with Wight the new second place car after getting by both Maresca and McAuliffe and Sheppard now in the top five. Friesen was in heavy lap traffic from lap 33 on in the event but still maintaining a four second lead over Wight who was searching all over the track for the right line to catch Friesen.

With four laps remaining the final caution flag of the event was out for Billy Pauch Jr. who suffered a left rear flat. Friesen pulled away on the single file restart and went on to over a four second victory in the Halmar #44 Bicknell car followed by Wight, Maresca, McAuliffe, and 13th place starter Jessica Friesen.

“So, honored to win a race in memory of our friend Mike Cole,” Friesen said in victory lane. “So special to win a race in honor of a great friend, a great race fan, and a great friend and fan of the Fonda Speedway. We have a lot of great guys on our race team who put in a lot of hard work and we really have something special here.”

“I said to Jess (Stewart’s wife Jessica Friesen) that if there was ever a place that I was glad that I figured out it’s Fonda because it’s close to home and that makes it a lot more fun. We will celebrate this one for sure and then we will be at Kentucky this weekend with the Halmar truck representing everyone here at the Fonda Speedway.”

“I definitely wanted to get the win here in the Short Track Super Series event here at Fonda but just didn’t have the right combination and came up a little bit short,” Wight said after a second place finish in the FX Caprara sponsored #99L.

The 25-lap STSS Sportsman feature began with invader Matt Mead and Fonda Speedway regular Ricky Quick on the front row with Meade the early leader. Chad Edwards started the event in spot number four and took the second position away from Quick on lap one with fifth place starter Brian Calabrese also getting by for the third spot.

On the outside of turn two on lap three, Edwards took the lead away from Meade who fought off the challenges of Calabrese for many laps before Calabrese was able to get by Meade for the second position on lap eight. At the halfway point, the top five in the event consisted of Edwards, Calabrese, Meade, Quick, and defending Fonda Speedway Swagger Factory Apparel Crate 602 Sportsman Track Champion Tim Hartman Jr.

Calabrese had the fastest car on the track in the closing laps but ran out of time to catch Edwards who won the event in the John Kollar Motorsports #10% over Calabrese, Meade, Quick, and Hartman Jr.

“The car was perfect tonight in the feature, I found a nice ring of rubber on the track from the middle to the bottom,” Edwards said after the win. “The car wasn’t great in the heat races, but we made a lot of changes to it for the feature.”

“I wish that I could have gotten by Meade earlier,” Calabrese said in victory lane after his second-place finish in the L/M Mason Contracting sponsored #21C. “I was hoping for a caution so I could have challenged him for the win. I was just trying to stay calm in traffic and keep the car in one piece.