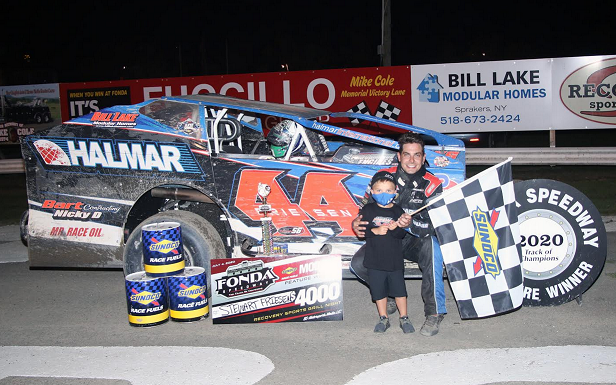 Fonda, NY – Saturday evening at the “Track of Champions” Fonda Speedway, The Recovery Sports Grill presented a Red, White, & Blue Special racing program in honor of Independence Day. When the final checkered flags flew on the racing activities Stewart Friesen was the winner of the $4,000 to win Sunoco Modified feature while Nick Stone was the winner of $1,776 as the Algonkin Motel Pro Stock feature winner.

Friesen has won every event he has raced in at Fonda in 2020, last weeks racing at Fonda being the exception as he had prior commitments which kept him away. Stone is also the winner of three out of four events so far in 2020, with his only defeat of the season coming a couple of weeks ago.

DTD TV presented the racing activities live on pay per view while Stephanie May sung a great rendition of the National Anthem to celebrate July 4th.

At the intermission Farmers Insurance threw out some goodies to the fans in the grandstand, thanks to them for their support of the Fonda Speedway.

Joe Kriss threw the green flag to start the 30-lap Sunoco Modified main event with the yellow out before the field reached turn one when Michael Maresca and Pep Corradi were connected together just outside of turn four with one car on top of the others front end. Both cars were able to continue at the rear of the field.

Craig Hanson led on the second attempt to get the event going from his outside front row starting position with Roger Henion Jr. and Sunoco Modified Rookie Adam McAuliffe in tow. Larry Wight and Stewart Friesen started the event back in the sixth row and came to the front together, Wight in the top five at the lap 12 point in the event with Friesen right behind him in sixth.

Lap traffic came in to play for the leaders at that point with Hanson, McAuliffe, Josh Hohenforst, Henion, and Wight completing the top five. Friesen went in between both Wight and a lap car to take away the fifth position on lap 13 and one lap later he also got by Henion for the fourth position.

The top three of Hanson, McAuliffe, and Hohenforst pulled away from the rest of the field until lap 14 when both BBL Companies team cars of Matt DeLorenzo and Brian Gleason suffered flat tires bringing out the caution flag. On the restart both Friesen and Wight moved up to the third and fourth positions with Friesen able to also get by McAuliffe for the second spot.

On the inside of turn four on lap 16, Friesen was able to take the lead away from Hanson and from that point on the race was for the second spot as Friesen pulled away to a big lead. Wight took the third position away from McAuliffe on lap 19 and one lap later he also got by Hanson for the second position while Friesen was out to a six second advantage over the rest of the field.

Attention turned to Jessica Friesen at that point as she started the event in the 10th position but moved into the fourth spot on lap 21. Three laps later she was the new third place car after getting by Hanson for the spot. Stewart Friesen was running so high in turns one and two that he was almost hitting the wall with his right rear with one final caution out with three laps to go for Sunoco Modified Rookie Rich Christman who suffered a right rear flat tire.

Stewart Friesen led on the restart and led the remaining laps for his third win of the season and the 63rd of his career at the “Track of Champions” in the Halmar sponsored #44 Bicknell powered by Billy the Kid Engines. Wight, Jessica Friesen, Hanson, and defending Sunoco Modified Track Champion Rocky Warner completed the top five in the event.

“You could race all over the track tonight,” Friesen said in victory lane as his son Parker did a dance on the roof with the checkered flag in hand. “It’s nice to see fans back here at Fonda tonight and great to see Jess get a great third place finish. Thanks to my Halmar team for all their hard work on these two Modifieds. It is truly a team effort.”

On lap nine the caution was out for Brian Calabrese who lost a left front tire and drove to the infield out of harms way. He then drove back on the track on the backstretch to get the caution flag to fly slowing the field for the first time in the event. On the restart, sixth place starter Cody Clark took over the race lead and at the halfway point in the event the top five consisted of Clark, McAuliffe, VanVorst, 12th place starter Chad Edwards, and Santabarbara.

Clark’s straightaway advantage closed with the caution out on lap 17 for Tony Farone who suffered a left rear flat. On the restart the caution flew again for a four-car wreck in turn two involving Santabarbara, Nick Scavia, Michael McCallion, and Brendan Gibbons. The restart was single file this time with Clark able to hold off the challenges of Edwards to take the victory in the Upstate Motorsports #4 Teo car for his first win of the season and the eighth of his career in the division over Edwards, VanVorst, Tucker O’Connor, and JaMike Sowle.

“We’ve been struggling,” Clark told Mimi Lazzaro in victory lane. “But we’ve been doing our homework and been on the phone to a lot of different people about it as well. This is our first victory lane with our daughter Maelynn Alivia, so this is a special one for sure.”

Heat race events qualified the field for the first time in 2020 in the Montgomery County Office for Aging Inc. Limited Sportsman feature event with Dylan Eldred leading at the start. Just after lap one was completed, the red flag was out for Carter Gibbons who flipped his car in between turns one and two with a couple of other cars also involved. All drivers were okay after the incident.

Eldred pulled away to a big lead by the lap eight point in the event with the best race on track being the one for the second spot between Rapp, Gray, and Mortensen. The final yellow of the event was out on lap 12 when something broke in the left front of Mortensen’s car ending his great run. The yellow was out again on the restart when Gray spun his car in turn two while running third but it was Eldred who led the rest of the way after the restart as he captured his second career win in the division.

Rapp, John Young, Clayton DuMond, and Yule Cook completed the top five in the event. Horti-Care Landscaping Services paid out a $100 bonus to the winner and a $50 bonus to the second through fifth place finishers so thanks to them for their support of the Fonda Speedway.

The 25-lap Algonkin Motel Pro Stock feature began with Chuck Dumblewski leading at the drop of the green flag with Jason Morrison in tow after they started the event on the front row. Defending Algonkin Motel Pro Stock Track Champion Luke Horning started the event in the 10th position and was in the top five on lap three with 12th place starter Nick Stone right behind Horning in the sixth position.

Just as Stone got by Horning for a spot in the top five, Devon Camenga moved past Morrison for the second spot. Stone continued to pass cars at will, taking the third position away from Morrison on lap eight and two laps later the second spot away from Camenga. The top four of Dumblewski, Stone, Camenga, and Horning were together racing for the lead on lap 12 with Dumblewski and Stone racing side by side for the lead.

Stone was working the inside groove while Dumblewski stayed on the outside but it was the inside groove that was the place to be as Stone took over the lead on the inside of turns three and four on lap 13. Horning took over the second position on lap 16 after getting by Dumblewski but Stone was a straightaway ahead with a clear track ahead of him as he went on to his third win of the season and the 49th of his career in the division at Fonda over Horning, Dumblewski, Camenga, and 11th place starter Josh Coonradt.

“This track has been different almost every time we get on it, but we’ve been hitting the setup each time,” Stone said. “Tonight, I just kept the car straight and went for it.”

Defending Robert’s Towing & Recovery Street Stock Track Champion Jason Samrov was the winner of the 15-lap Street Stock feature event on Saturday after leading every lap of the event for his first win of the season and the 14th of his career in the division over Al Relyea, Dave Horning Sr., Josh Samrov, and Lou Gancarz.

Tonight, Sunday July 5 the $10,000 “Firecracker 50” for the Bob Hilbert Sportswear Short Track Super Series North Region will take place at the Fonda Speedway. The event was rained out last Wednesday evening and will also consist of a STSS Sportsman event paying $2,000 to the winner. Racing begins on Sunday evening at 7:00 p.m.