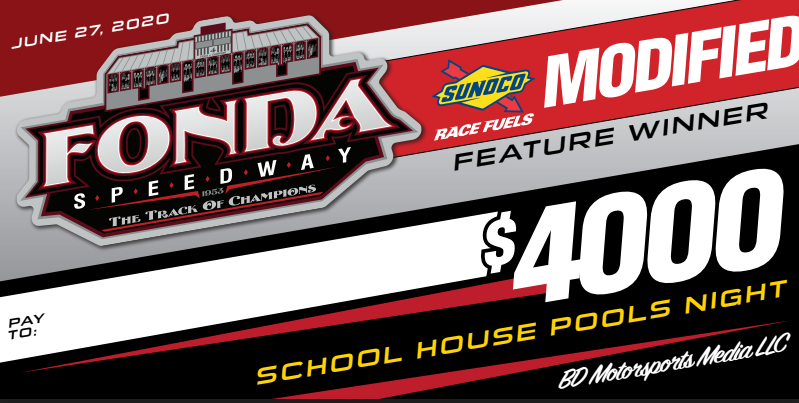 Fonda, NY – This Saturday, June 27 the racing action continues at the “Track of Champions” Fonda Speedway with a special $4,000 to win Sunoco Modified Firecracker Shakedown plus all other divisions in action on School House Pools Inc. Night.

The original 2020 Fonda Speedway schedule also had the Rapid Tire USAC East Coast Sprint Cars on the schedule for June 27 but that has since been postponed and below is what was posted on the Fonda Speedway Facebook page earlier this week.

“Unfortunately with the Afton Motorsports Park not opening until the weekend of July 3rd, a mutual decision was made between weekend promoter Brett Deyo, and the USAC East Coast Sprint Car Series, to postpone this weekend’s events at the Fonda Speedway,” according to an announcement made earlier this week. “It was agreed that we did not want to risk our drivers and teams having to make an extremely long haul for just one event in New York.”

“Together with promoter Brett Deyo, we will work together to look for suitable dates to reschedule the weekend in the 2020 season. If a suitable two-day weekend for the Afton Motorsports Park, Fonda Speedway weekend is not found in 2020, the weekend will stay on the series schedule for the 2021 season.”

The schedule only gets busier as there are now three events scheduled at Fonda in just eight days starting with the June 27 event described above. Then on Wednesday, July 1 the “Track of Champions” will host the Fuccillo Automotive Group Firecracker 50, Bob Hilbert Sportswear Short Track Super Series (STSS) Fueled By Sunoco Modifieds 50 laps, $10,000 to win plus STSS Crate 602 Sportsman, 25-laps for $2,000 to win.

The final event of the eight-day stretch will be on Saturday, July 4 when the Recovery Sports Grill presents the Red, White & Blue Special. It will be Dollar Dog Night with a $4,000 to win Sunoco Modifieds feature, a $1,776 to win Algonkin Pro Stock event plus a regular show in all other divisions along with the Mohawk Valley Vintage Dirt Modified Series (MVVDMS).

FONDA SPEEDWAY HISTORY FOR THE WEEK OF 6/27