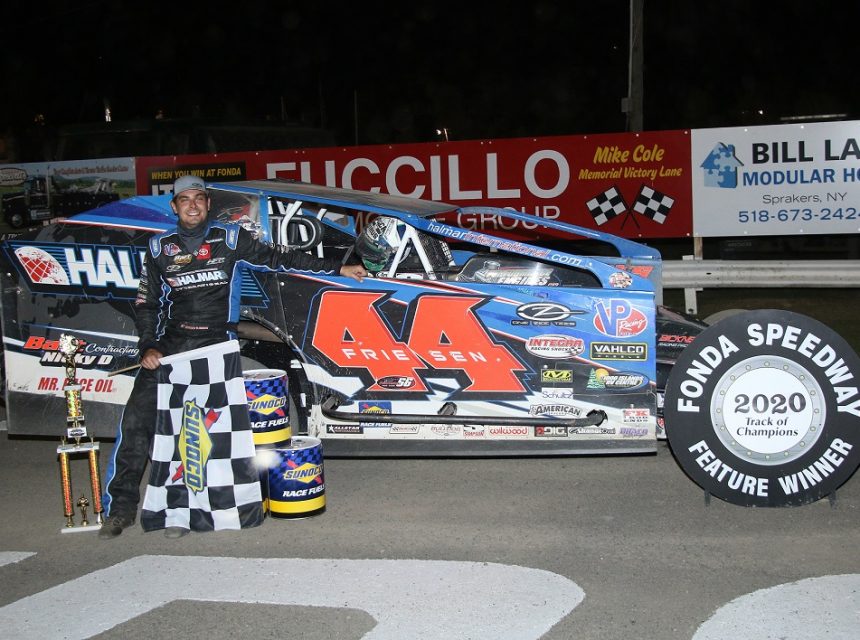 Fonda, NY – People were invited to come to the Fonda Speedway to dine at Denise’s Concessions on Saturday evening and quite a few people did just that and along with the drive in on the infield it was a great night of racing at the “Track of Champions”.

Mimi Lazzaro did a beautiful rendition of the National Anthem before all the action started on Father’s Day weekend 2020.

The 30-lap Sunoco Modified feature began with Modified Rookie Adam McAuliffe and Danny Varin on the front row with Varin taking the lead at the drop of Joe Kriss’ green flag. Varin held the advantage through two caution flags before sixth place starter Michael Maresca took over the lead on the backstretch on lap five.

The caution flag flew again shortly afterwards and, on the restart, 10th place starter Stewart Friesen went from sixth to third and one lap later got by both Varin and Maresca for the lead on the outside of turn four. Invader Mat Williamson started the event in the eighth starting position and by lap 10 he was up to the third spot behind Stewart Friesen and Maresca.

While Stewart Friesen was running the outside groove, Maresca stuck with the low lane and was keeping pace with the leader, side by side at times, until Stewart Friesen decided it was time to make a lane change to the low line on lap 11 when he was also in heavy lap traffic. Two more yellow flags slowed the field as Jessica Friesen, Varin, and McAuliffe all fell out of the event with various issues.

Stewart Friesen was up to the challenge that restarts can often bring and maintained the lead through each of them. From lap 17 to the checkered flag Stewart Friesen was in lap traffic but weaved back and forth from the inside to the outside to get by them and stay in front of his competitors as he went on to a back to back win, the 62nd of his career at Fonda, in the Halmar #44 Bicknell car.

Stewart’s son Parker celebrated with a roof dance on victory lane before Mimi Lazzaro got to interview the winner who said “I just love this race track, no matter where you start you just have to find a groove and a place to race. Tonight, there was brown up on top and the bottom was good too so you could race anywhere you wanted.”

Joe Williams took advantage of his front row starting position to take the lead at the drop of the green flag in the 25-lap Swagger Factory Apparel Crate 602 Sportsman feature with fourth place starter Brian Calabrese in tow. Chad Edwards started the event in the seventh position and on lap three he was able to get by Michael Wagner-Fitzgerald for the third position while sixth place starter Mark Mortensen also got by Wagner-Fitzgerald for the fourth position.

Edwards got by Calabrese for the second position on lap six while ninth place starter Brian Borst also gained positions into the top five. Lap traffic slowed Williams on lap eight allowing Edwards to close in on the leader and from that point on in the event the leader was in lap traffic with Edwards trying whatever he could to get by both the lap cars and the leader.

Williams made a feature win saving move on the final lap as he got by two lap cars on the inside of turns one and two to give himself a little breathing room. That was short lived however as Edwards was on his rear bumper again going into turn three but Williams was able to hold on to the lead and win the event by 0.298 seconds over Edwards in the Wagon Train BBQ sponsored #19L for his first career win in the division.

“This is my first win on dirt in the crate sportsman and it seems like it took forever to get it done,” Williams said in victory lane. “But we kept the car in one piece and got the win so I’m very happy.”

Williams had one other win during his career at Fonda which came in the “Open” Sportsman division back on May 1, 2004.

Pete Nowicki Jr. started on the pole position in the 15-lap Montgomery County Office for Aging Inc. Limited Sportsman feature event and took the lead at the drop of the green flag. Carter Gibbons started the event in the third position and was the new second place car at the completion of lap one.

On lap two on the inside groove on the back stretch, Gibbons was the new race leader and he immediately stretched out his advantage to a comfortable margin. After starting the event in the 12th position, last weeks winner Brett Mortensen was up to the second position on lap six after getting by both Johnny Young and Dylan Eldred for the spot.

At that point Gibbons was out to a straightaway advantage but lap after lap Mortensen was able to cut into that lead and by lap nine, he was running lap times a half second faster than Gibbons. With two laps to go, Mortensen was on Gibbons rear bumper and on the outside groove on the backstretch Mortensen got by Gibbons for the lead. Mortensen went on to a back to back win after winning on opening night for his fourth career win in the division in the 518 Realty sponsored Teo car.

“I was trying to stay off the gas as much as I could to keep the rear end underneath me in the slick areas on the track,” Mortensen told Mimi Lazzaro on victory lane.

The 20-lap Algonkin Motel Pro Stock feature was an exciting one with Justin Knight the race leader at the drop of the green flag. On lap four, defending track champion Luke Horning was the new race leader after getting by Knight on the outside of turns three and four. The yellow flag was out one lap later for last weeks winner Nick Stone whose hood came undone and he was forced to the hot pit to remove the hood and restart at the rear of the field.

Coonradt went between a lap car and Horning for the lead on lap 12 in turn three with the caution out shortly afterwards. On the restart, Coonradt continued to lead with Horning, Gates, Knight, and Stone who did a remarkable job to get back to the front without a hood on his race car.

Stone and Horning were running side by side for the second position with five laps to go allowing Coonradt to stretch out his advantage. The final caution of the event was out on lap 16 closing up the field and allowing for a great finish. Coonradt stayed low on the track with Stone running the high groove over the final laps, side by side at times, with Coonradt holding on to get the victory, the fifth of his career in the division at Fonda.

“After the heat race and warm-ups, I didn’t know if I had anything to compete for the win with,” Coonradt said in victory lane. “Under the yellow I was looking to make something happen when we went green again and we made it here to victory lane.”

Michael Arnold led the first two laps of the Robert’s Towing & Recovery Street Stock feature before last weeks winner Al Relyea took over the lead on lap three after starting seventh and went on to a back to back win after winning last weeks event. Defending Track Champion Jason Samrov was second followed by Dave Horning Sr., Arnold, and Lou Gancarz.

Ken Hollenbeck led all 15 laps in the Four Cylinder Cruiser feature after starting fourth and went on to his 51st career win in the division in the SOHC while David Frame was declared the winner in the DOHC class after finishing second in the event behind Hollenbeck. John Napoli, Zach McSpirit, and Wayne Russell completed the top five in the event.

For announcements on next week’s racing events at the “Track of Champions” Fonda Speedway please go to the track’s website or Facebook page.