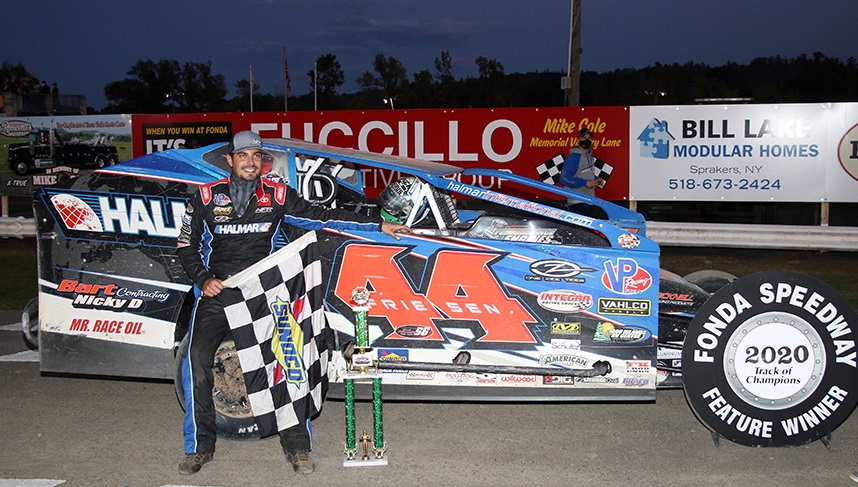 Fonda, NY – On Sunday evening the “Track of Champions” Fonda Speedway hosted day two of opening weekend 2020 with a familiar face in victory lane at the conclusion of the event. Stewart Friesen celebrated in victory lane with his family (his son Parker and Stewart both celebrated the win on the roof of the race car in victory lane) and crew after winning his 61st career win in the Sunoco Modified division in the Halmar sponsored #44 Bicknell car.

“What can I say,” Friesen said in victory lane. “The track was much different than I am used to, very slick, and I had to slow the pace down a little as when I ran up high, I was almost in the wall.”

Other winners on day two of opening weekend were Brett Mortensen (Montgomery County Office for Aging Inc. Limited Sportsman), Al Relyea (Robert’s Towing & Recovery Street Stocks), and Justin Pope (DOHC) and Zach McSpirit (SOHC) in the Four Cylinder Cruisers. For both Relyea and Pope it was their first career wins at the “Track of Champions”.

Race fans were allowed on the infield to watch the events in a drive in type atmosphere and it was popular with them as they got to cheer Friesen and other winners on from the infield split in the fence on pit road as the drivers celebrated their wins on victory lane. Dirt Track Digest TV was on hand to film the event for pay per view and did a great job getting the action out to the fans that could not be in attendance.

Mimi Lazzaro sang the National Anthem and it was time to go racing after that. The 50/50 for the evening was worth $1,237 to the winner.

Special thanks to Palmer’s Service Center for their support of the Fonda Speedway as they paid out a $100 heat race bonus to the winners of the Sunoco Modified heat race event winners  with Stewart Friesen, Larry Wight, Anthony Perrego, and Josh Hohenforst taking the heat race victories.

The 30-lap Sunoco Modified feature began with Michael Maresca the early leader after the luck of the draw put him on the pole position for the start with Sunoco Modified rookie Adam McAuliffe in tow. Seventh place starter Brian Gleason was on the move early, climbing up to the third position by lap three.

Defending Sunoco Modified Track Champion Rocky Warner and fifth place starter Larry Wight were both able to get around Gleason for the third and fourth positions by lap five with Warner the new second place car on lap six after getting by McAuliffe. Wight also got by McAuliffe for the third position and on lap eight it was a three-way battle for the lead between Maresca, Warner, and Wight.

Maresca was in lap traffic on lap 12 as Matt Sheppard and Stewart Friesen who started sixth and 10th respectively were swapping the fourth position in a great race for position. The yellow was out shortly afterwards for Darwin Greene who was in the turn one wall and was done for the evening at that point.

Friesen restarted the event in the fifth position but at the drop of Nick Squires green flag Friesen made it three wide to get into the second position. Friesen found something on the inside of the speedway and went by Maresca for the lead on the bottom of turns one and two on lap 14.

Warner also got by Maresca for the second position on lap 15 with the top five at the halfway point consisting of Friesen, Warner, Maresca, Sheppard, and Wight. Wight was running high all around the racetrack and on lap 15 he got too high in turn one and got into the wall. He pitted and returned to the rear of the field.

On the double file restart, Friesen chose the inside with Sheppard getting up to the third position behind Warner. With 10 laps to go Friesen was out to a straightway advantage but encountered lap traffic on lap 22, ducking inside and outside of the lap cars as needed to maintain the lead. With four laps to go Sheppard started to pressure Warner for the second spot and on lap 27 he was able to get by for the runner-up position.

Friesen went on to the win for the 61st time in his career at Fonda with the wins complied in just 10 winning seasons! Sheppard ended up second followed by Warner, Maresca, and ninth place starter Matt DeLorenzo.

“This new clay is so much different,” Friesen told Mimi Lazzaro in victory lane. “That was a heck of a lot of fun. Thanks to my crew, sponsors, Bicknell Racing Products, and Billy the Kid engines. All I’ve been hearing lately is about the truck and I promise you we are trying; we are trying to give our fans in the Northeast something to cheer about.”

The 15-lap Montgomery County Office for Aging Inc. Limited Sportsman feature began with a no start as the outside pole sitter went a little early but things settled down the second time as Brett Mortensen led at the drop of the green flag. The caution flag flew six times in the event giving drivers numerous chances to gain positions.

The first caution came out at the completion of lap one and on the restart Johnny Young was the new second place car after making contact with Spencer Rapp to get the position. On the next lap the caution was out again as Rapp made contact with Young coming out of turn two, spinning both cars into the backstretch wall. Both cars pitted and returned to competition at the rear of the field.

Mortensen continued to lead on the restart and was out to a straightaway advantage by lap five with Kadon Hohensheldt, Carter Gibbons, Dylan Eldred, and Yule Cook in tow. At the halfway point in the event, Mortensen held a comfortable advantage over Gibbons who was the new second place car and Cook who started in the 11th position.

Young was all the way back up to the fourth position on lap 10 after his wreck early in the event while Mortensen again held a straightaway advantage over the field. When Rapp came to a stop in turn three on the final lap bringing out the caution again it set up a green, white, checkered finish giving Gibbons, Hohensheldt, and Cook another shot at the leader.

Mortensen got a good restart and was able to pull away for his third career win in the division in the 518 Realty sponsored #1B and was followed in the top five by Cook, Hohensheldt, Gibbons, and Eldred.

In post-race tech Cook, Hohensheldt, and Gibbons were all disqualified moving Eldred, Jeff Lutes, Young, and Pete Nowicki Jr. into the top five.

“Winning from the front isn’t the greatest thing but I’ll take it after the week I’ve had,” Mortensen told Mimi Lazzaro in victory lane. “We spent the whole day today putting a new rear end in the car after getting hit on Saturday night.”

The 15-lap Robert’s Towing & Recovery Street Stock feature was an entertaining event with defending track champion Jason Samrov leading at the drop of the green flag with Al Relyea in tow. After a restart on lap four, sixth place starter Michael Arnold and Relyea swapped the second position twice with Dave Horning Sr. the new third place car on lap five behind Samrov and Relyea.

Relyea got into the back of the leader on lap nine, spinning Samrov around and bringing out the caution. On the restart, Relyea was the new leader with Horning Sr. now second and that is the way it would end at the checkered flag with Relyea taking his first career win in the division at Fonda followed by Horning Sr., Arnold, John Bradt, and Jim Duncan.

“I feel bad about what happened to Jason (Samrov),” Relyea said in victory lane as he apologized for the incident. “We were running real close and I got into the back of him in turn one, I tried to straighten him out, but it didn’t work.”

Two red flags in the Four Cylinder Cruiser feature before any laps were completed took out half the field before the race was finally able to start with Justin Pope leading every lap on his way to his first career win at Fonda as a dual overhead cam car while second place finisher Zach McSpirit was declared the winner in his single overhead cam racecar. Wayne Russell, Bubba Cook, and defending track champion Ken Hollenbeck completed the top five.

Please check the Fonda Speedway website or Facebook page for announcements on upcoming events at the track.