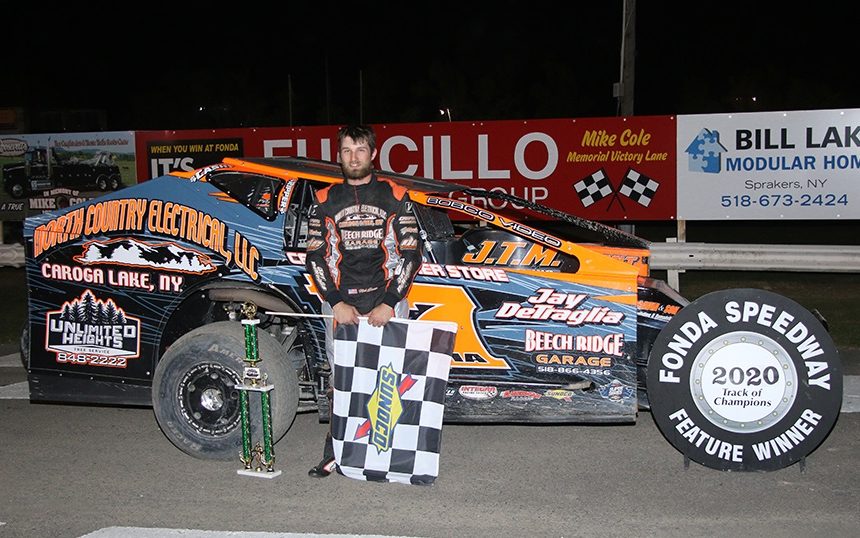 FONDA, NY – Saturday evening at the “Track of Champions” was the first day of racing on opening weekend for 2020, but it had a little different feel than in previous years on opening day as no fans were allowed in the grandstands for the event due to regulations brought on by the COVID-19 pandemic.

Thanks to Dirt Track Digest TV, the event was televised live on pay per view for all of the fans to see and a great job was done by their entire crew to give fans the experience of being there at the track.

One thing that wasn’t any different was the great racing action put on by all of the drivers in the Swagger Factory Motel Crate 602 Sportsman division, the Algonkin Motel Pro Stock division, and the Mohawk Valley Vintage Dirt Modified Series (MVVDMS). 80 racecars were in competition for the evening with a few other cars also taking advantage of an open practice session in between racing events.

The first 50/50 of the season was worth $433 to the winner after tickets were sold in the pit area.

The 25-lap Swagger Factory Apparel Crate 602 Sportsman began with Nick Scavia and JaMike Sowle on the front row after a redraw determined starting positions for the event with Scavia taking the early lead. An early yellow slowed the field on lap three for Thomas VanVorst who was in the wall in between turns one and two.

On the restart, fourth place starter Chad Edwards took the second position away from Sowle with ninth place starter Joe Williams up to the fourth position at that point as he also challenged Sowle for the third position. Scavia was in lap traffic on lap 11 when the caution came out for a couple of cars that got together in turn two and on this restart while running fifth, defending track champion Tim Hartman Jr. was smoking heavily and brought out another caution flag.

Seventh place starter Brian Calabrese moved into the third position on the restart and at the halfway point in the event the top five consisted of Scavia in the lead followed by Edwards, Calabrese, Williams, and Mark Mortensen. Scavia was in heavy lap traffic with four laps to go and on the final lap as he was going to the checkered flag, the final caution of the event came out for a three car wreck in turn four giving Edwards and Calabrese one more shot at the victory.

Scavia pulled away at the drop of the green flag and went on to his sixth career win in the division in the North Country Electrical LLC sponsored DKM chassis followed in the top five by Edwards in his first time in the John Kollar Motorsports #10%, Calabrese, Williams, and Sowle.

“It’s good to be back at the track, the situation going on has been tough on all of us,” Scavia told Mimi Lazzaro in victory lane. “Starting on the pole like we did tonight can be both good or bad as you have an open track in front of you but you can also drop back quickly if you don’t get a good start. This is a great win for us after a trailer fire late last season on the way to the races, we had some electrical issues tonight and I want to thank my crew and all of the teams in the pit area who helped us straighten that out.”

The 20-lap Algonkin Motel Pro Stock feature began with pole sitter Steve Cosselman taking the early lead before third place starter Nick Stone took over the lead before lap one was completed. The yellow flag was out on lap two for Beau Ballard who suffered a flat left rear tire. Ballard pitted for a new tire and rejoined the race at the rear of the field. On the restart fifth place starter Luke Horning was the new second place car with the yellow out again for Devon Camenga who also suffered a flat tire.

On this restart, Stone and Horning stayed side by side for an entire lap before Stone got the lead back and pulled away from that point on. Stone was out to a straightaway lead on lap seven with the focus turning to the race for second between Horning and Josh Coonradt who were running side by side at times as they battled hard and clean for the runner up spot.

At the halfway point in the event Stone, Horning, Coonradt, Steve Cosselman, and Jim Normoyle completed the top five with Stone almost a half track ahead of the second-place car. With five laps to go Horning and Stone continued their battle for the second position, swapping the spot numerous times until with one lap to go Horning took the spot for good after Coonradt slipped up high in between turns one and two.

Stone went on to his 47th career win in the division in the Meltz Lumber sponsored #27 followed in the top five by Horning, Coonradt, 14th place starter Andy Graves, and 12th place starter David Emigh.

“This is a new car that we built over the winter,” Stone said in victory lane. “We did a lot of work on experimenting with the coil spring setup knowing that a couple changes needed to be made. Thanks to my crew for working on the car so that I can sit back and relax and concentrate on the race ahead of me. I have spent all of my life, day and night on racecars, and I love it.”

The 15-lap Mohawk Valley Vintage Dirt Modified Series (MVVDMS) Replica feature started with Kyle Hoard leading from the pole with John Flach second after starting fourth. Flach took over the lead on lap eight but one lap later in lap traffic, Hoard retook the lead and looked to be going on for the win but lap traffic came into play again on the final lap with Flach able to get by for the lead and the win. Hoard, Darral Hulbert, Stephon Denton, and Fran Hoard.

Special thanks goes out to Palmer’s Service Center for their support of the “Track of Champions” as they paid out a $75 bonus to heat race winners in the Swagger Factory Apparel Crate 602 Sportsman division with the wins going to Edwards, Scavia, and Brendan Gibbons. They also paid out a $50 bonus to the heat race winners in the Algonkin Motel Pro Stock division with those bonuses going to Horning and Stone.

Special thanks also goes out to Jason and Coleen Morrison who paid out a $50 bonus to the 6th and 10th place finishers in both the Swagger Factory Apparel Crate 602 Sportsman and Algonkin Motel Pro Stock features with those bonuses going to Michael Wagner-Fitzgerald and Alex Bell in the Sportsman division and Steve Cosselman and Devon Camenga in the Pro Stock division.

6th and 10th place finishers in the feature, Michael Wagner-Fitzgerald, and Alex Bell respectively, paid $50 from Jason and Colleen Morrison

6th and 10th place finishers in the feature, Steve Cosselman and Devon Camenga respectively, paid $50 from Jason and Colleen Morrison