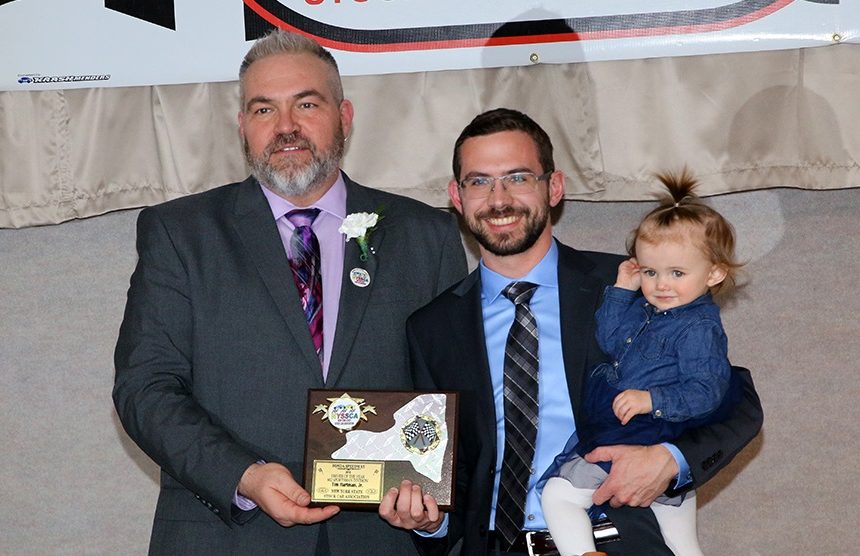 Albany, NY – On Saturday, February 22 the New York State Stock Car Association (NYSSCA) held their 51st annual awards banquet at the Polish Community Center in Albany, NY. 340 guests filled the banquet hall for a great meal and to witness the many awards given out by the organization to the racing community for their achievements during the 2019 racing season.

The banquet was emceed by NYSSCA Board Member Dan Martin who is also the announcer at both the Lebanon Valley and Albany Saratoga Speedway’s and Shane Andrews who is the voice of the Super DIRTcar Series events along with many other events at local tracks in the Central New York area.

NYSSCA President Dan Wood started out the evening by saying “this is our 51st annual awards banquet, it is the start of a new decade, and for many, new beginnings in 2020. That includes the NYSSCA organization as this will be the final awards banquet, we aren’t going anywhere however as the Hall of Fame and award ceremonies will continue to he held each year along with NYSSCA Nights (formerly known as NYSSCA Safety Nights) at all of our member tracks.”

“We will also be present at the local car shows in March so that people can sign up for their 2020 NYSSCA memberships,” Wood continued to say. “I’d like to thank the Bedell Family, Cheryl Catman, Frank McKay, Mark Brown for all of the photographs he provides to the organization, our emcees for the evening Dan Martin and Shane Andrews, all of our track reps and board members, all member tracks of the organization, the media, car owners, drivers, officials, emergency crews, track promoters, and everyone at the banquet tonight because without all of you NYSSCA would have no purpose.”

Pastor Ed Harkins blessed the food that was prepared, and a delicious buffet style meal was then served.

Driving for legendary car owner Jake Spraker in 2019, Warner had five wins at Fonda on his way to the Modified Track Championship which was his first in the Modified division. It wasn’t his first ever track championship at Fonda however as he now has championships in all four of the divisions that he has competed in at Fonda throughout his career including Street Stock titles in 2005 as co-champion, and 2007; a Pro Stock championship in 2011; and Crate 602 Sportsman titles in 2014, 2015, 2016, & 2017.

Driving for car owner Mike Parillo in 2019, Hartman Jr. had a career season of seven wins in the division at Fonda, taking home his first ever track championship in the class. Hartman has a total of 11 career wins in the division, his first one coming on 8/10/2013 and his last on 9/28/2019.

Driving the family owned racing team #234X, McAuliffe won five times in 2019 on his way to his first ever track title at Fonda. He has six career wins in the Limited Sportsman division which ties him for second on the all-time win list in the class, the first one coming on 5/27/2017 and the last on 8/10/2019.

Friesen ran a part time schedule at Fonda in 2019 due to his commitments with the NASCAR Gander RV & Outdoors Truck Series where he was a two-time winner in 2019. Even though he ran a part time schedule at Fonda he was still able to win six times in 2019, two of the events being the biggest ones of the season at the “Track of Champions” the Firecracker 50 in July and the Fonda 200 in September and finished the season with a fourth place finish in the final point standings.

Horning Sr. won the first four street stock features in the 2019 season and ended up fourth in the final point standings. With those four wins, Horning Sr. now has a total of 62 career wins in the division at Fonda, his first one coming on 4/14/2001 and his last on 5/18/2019 which is on top of the all-time win list. All combined Horning Sr. and his son Dave Horning Jr. have a total of 113 victories in the Street Stock division at Fonda.

Schilling competed for the first time in a Modified at Fonda in 2019 and finished sixth in the final point standings with five top five finishes and 12 top 10 finishes in the division.

Competing in his first full season in the division at Fonda, Buff finished ninth in the final point standings with five top five finishes and eight top 10 finishes.

Knapp finished ninth in points with one top five finish and nine top 10 finishes in 2019. He does have one career Pro Stock win at Fonda during his career that coming on 9/17/2011

In his first year in the division at Fonda, Samrov had two top five finishes and six top 10 finishes on his way to a seventh-place finish in the final point standings.

Many special awards were also handed out to people who were associated with the Fonda Speedway in the past or still are in some form. They include the following:

“This award means a lot to me,” Romano said at the banquet. “When I was a little kid Kenny was over at my house a lot and he helped me out a lot too. I am very fortunate to have made a lot of good friends in racing.”

Miller had six Late Model wins at Fonda along with a Limited Sportsman championship back in 1973.

Dedication to Racing in Memory of Harry Peek: Laurie Fallis

Fallis is the promoter of the Mohawk Valley Vintage Dirt Modified Series that races at Fonda a few times a year. She has done a great job promoting the club and growing it in popularity and she is also a columnist for the Race Pro Weekly website.

Friesen was a two-time winner in the NASCAR Gander RV & Outdoors Truck Series and had 16 Modified wins at nine different tracks in 2019.

Lamberton can be seen at Fonda every week and his radio show which began on WCSS in Amsterdam, then went to WVTL in Amsterdam, now can be heard on the Dirt Track Racing Network at 7:00 p.m. on Monday evenings. Lamberton has a 40-year association with NYSSCA and was the winner of the Media Award back in 1998.

Both the father and son raced at Fonda for a couple of years with Jay getting one Pro Stock feature win back on 7/2/2016.

Ed along with his wife Betty are Fonda Speedway regulars every Saturday evening and promote racing not only at Fonda but also along the entire Northeast at various tracks that they go to on a weekly basis. Ed & Betty are not only fans of the sport but also contributed to the Gater Racing News paper back in the day and now write a column for Dirt Track Digest (DTD) along with a paper in their local hometown area called the Mountain Eagle. They were also formerly media coordinators for the Fonda Speedway. Ed is now in his 46th year of Recovery and attends the Anti-DWI Court System down in Volusia County in Florida when they go down there for the winter months.

Horning had an outstanding 2019 racing season, winning the Pro Stock Track Championship at Fonda for the first time in his career. He had a total of 18 wins in 2019 at six different tracks. “This is a surprise to win this, I didn’t know about it until I got to the banquet and started going through the book,” Horning said.

Hartman Jr raced at Fonda in 2019 to his first career Crate 602 Sportsman points title. He was also crowned the Short Track Super Series (STSS) Crate 602 North Region Sportsman Champion. All total Hartman Jr. had a total of 17 wins at five different tracks in 2019.

There were four new inductees to the NYSSCA Hall of Fame at the Hall of Fame ceremony earlier in the day at the Saratoga Automobile Museum who were introduced to the banquet crowd as well. They were Charlie Langenstein, Mike McLaughlin, John McArdell, and Jeff Hoetzler.