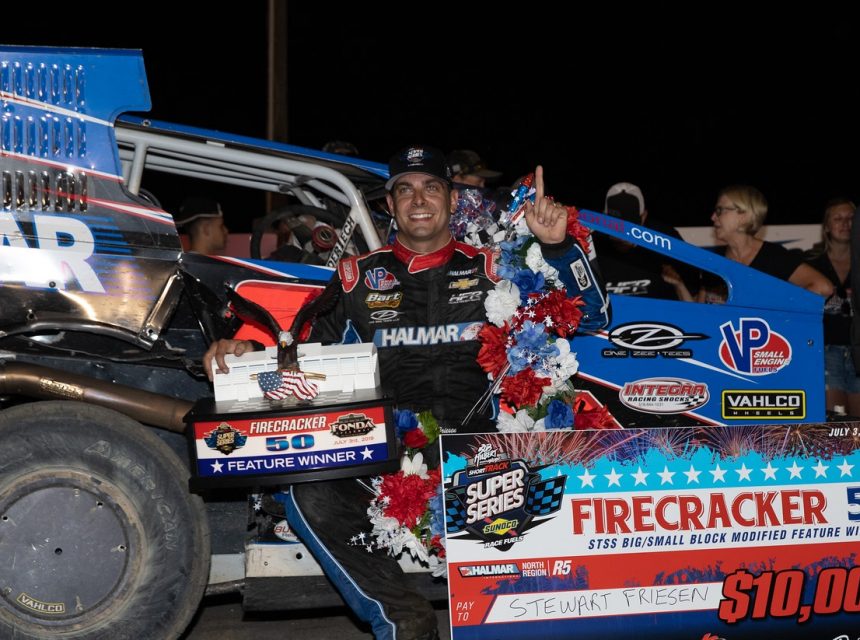 FONDA, NY – Fuccillo Automotive Group will continue its “huge” partnership with Fonda Speedway during the 2020 season.

Victory Lane at the hallowed ‘Track of Champions’ is a destination racers aspire to reach. Again this season, checkerboard square will carry even more meaning.

Fuccillo Automotive Group has signed on to present Victory Lane for the ‘20 season in memory of their longtime employee and avid race fan Mike Cole of Canajoharie, who worked at the Fuccillo Nelliston location. Mr. Cole passed away prior to the ’19 season.

The Wednesday, July 1 ‘Firecracker 50’ at the Track of Champions will again carry primary sponsorship from Fuccillo Automotive Group. The event offers $10,000 to win for the Bob Hilbert Sportswear Short Track Super Series (STSS) Fueled By Sunoco Modifieds plus lap money and other bonuses. The STSS Crate 602 Sportsman are also on the docket receiving a $2,000 top prize.

The ‘Firecracker’ went down as the race of the entire season for many fans last summer, as Stewart Friesen rebounded from a flat tire to pass Matt Sheppard on the final turn of the final circuit of the 50-lap affair. Sparks flew as the pair raced toward starter Joe Kriss’ Sunoco checkered flags.

Tim Hartman Jr. utilized his win in the accompanying Crate 602 Sportsman 25-lap main as a springboard to the STSS North Region championship.

The Fuccillo Automotive Group ‘Firecracker 50’ will be recorded for national broadcast on MAV-TV Motorsports Network, available to more than 35 million households across the country. Last year’s broadcast drew nationwide exposure for the speedway.