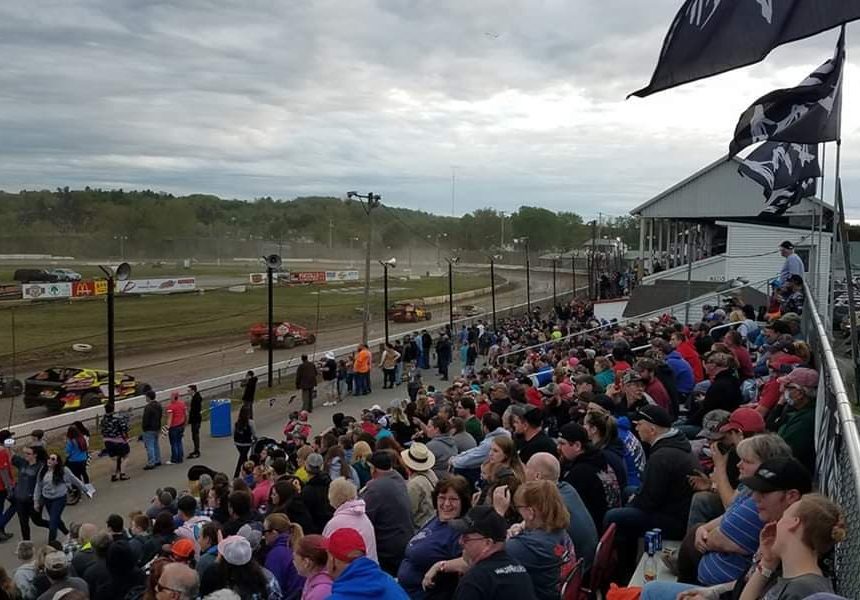 Fonda, NY – The 2019 season at the “Track of Champions” Fonda Speedway has been called by some the “resurgence” of the historical Montgomery County Fairgrounds half mile track, with large crowds and increased car counts witnessed during the first season under Brett Deyo and the BD Motorsports Media LLC management team.

The top performers from the 2019 season at Fonda were honored on Saturday, December 7 at the Fonda Speedway Awards Banquet hosted at Treviso by Mallozzi’s in Albany, N.Y. where a total of over $50,000 was paid out in point fund money to all six divisions including the Sunoco Modifieds, the Swagger Factory Apparel Crate 602 Sportsman, the Algonkin Motel Pro Stocks, the Montgomery County Office for Aging Limited Sportsman, the Trackside Body Works Street Stocks, and the Four Cylinder Cruisers.

The total of over $50,000 was a combination of the Fonda Speedway 50/50 point fund money and bonus money from American Racer for those who made the top 15 in overall points in the American Racer Cup standings with 2019 Sunoco Modified Track Champion Rocky Warner getting $10,125 for his first career modified championship at Fonda.

“But the biggest thing that stuck out to me was that we paid out $494,770 this year before tonight’s banquet,” Fonda Speedway promoter Brett Deyo told the crowd at the awards banquet.

A total of 18 events were held in the Sunoco Modified division in 2019 with seven different drivers winning those events. Stewart Friesen led the way with six feature wins moving him up to the fifth spot on the all-time win list with 60. The six victories included big wins in the $10,000 to win “Firecracker 50” in July, which was televised on MAV TV along with the $53,000 win in the “Fonda 200” in the last race of the season.

Because of Friesen’s commitment to the NASCAR Gander RV & Outdoors Truck Series he didn’t compete at Fonda on a weekly basis but was still able to finish fourth in the final point standings winning $2,000 from the Fonda point fund and $4,750 from the American Racer Cup points for a total of $6,750.

Next in line with total wins was Sunoco Modified point champion Rocky Warner with five victories in 2019 on his way to the title. With his point championship in the Sunoco Modified division at Fonda, Warner made a little history of his own as he now has point titles in all four of the different divisions that he has competed in at the “Track of Champions” including the Swagger Factory Apparel Crate 602 Sportsman in 2014, 2015, 2016, & 2017; the Algonkin Motel Pro Stock division in 2011; and the Trackside Body Works Street Stocks as co-champion in 2005 and champion in 2007.

Danny Varin was next in line with three wins at Fonda in 2019, finishing a career best third in the final point standings while Matt Sheppard, Dave Constantino, Bobby Varin, and Michael Maresca all had one feature win at Fonda in 2019.

The win by Constantino was the first of his career in the Sunoco Modified division at Fonda.

There were no first time winners in the Swagger Factory Apparel Crate 602 Sportsman division in 2019.

EJ McAuliffe led the way in wins in the Montgomery County Office of Aging Inc. Limited Sportsman division with five followed by Rich Christman with four, Brett Mortensen with two, Steve Wagoner and Michael McCallion who both had one win apiece. A total of 13 races were run in the division with five different drivers winning those events.

Mortensen, Christman, and Wagoner were first time winners in the Montgomery County Office for Aging Inc. Limited Sportsman division in 2019.

Luke Horning led the way in victories in the Algonkin Motel Pro Stock division on the way to his first title in the class with six feature wins. Four other drivers won races in the division including Nick Stone with four wins, three of them coming in the final four events of the regular season, Kenny Gates with three wins, Ivan Joslin and Josh Coonradt with one win apiece in a total of 15 events. Coonradt’s win came in one of the most prestigious events of the season, the Hondo Classic which in an annual event that is held in Memory of the late Hondo Carpenter.

There were no first time winners in the Algonkin Motel Pro Stock class in 2019.

First time Trackside Body Works Street Stock division champion Jason Samrov led the way with five wins in 2019 in the division which saw seven different feature winners in a total of 15 events. Next in line behind Samrov was Dave Horning Sr. who had a total of four wins coming in the first four events of the season. Stephen Young had a total of two feature wins in the division while Michael Arnold, Cliff Haslun, Ed Hatch, and Zach Sorrentino were all one time winners.

There were no first time winners in the Trackside Body Works division this season.

A total of 10 feature events were run in the Four Cylinder Cruiser division with Track Champion Ken Hollenbeck winning eight of those events. Cole Lawton won the other two events, the first one being the first of his career at Fonda. It was Hollenbeck’s sixth championship at Fonda in the division with titles in 2012, 2013, 2014, 2015, 2017, & 2019.

Competitors will be treated to a resurfaced half-mile track as more than 3,000 yards of fresh, rock-free clay was spread shortly after the completion of the 2019 season.

The Fonda Speedway Car Show will start the 2020 season on Friday through Sunday March 27-29 at the Viaport Mall. The first on-track activity is scheduled for Saturday, April 11 with an Open Practice session followed by opening night a week later on Saturday, April 18.

Some highlights to the 2020 schedule are as follows:

The complete 2020 schedule for the “Track of Champions” is posted on the official Fonda Speedway website www.thefondaspeedway.com under the schedule tab.