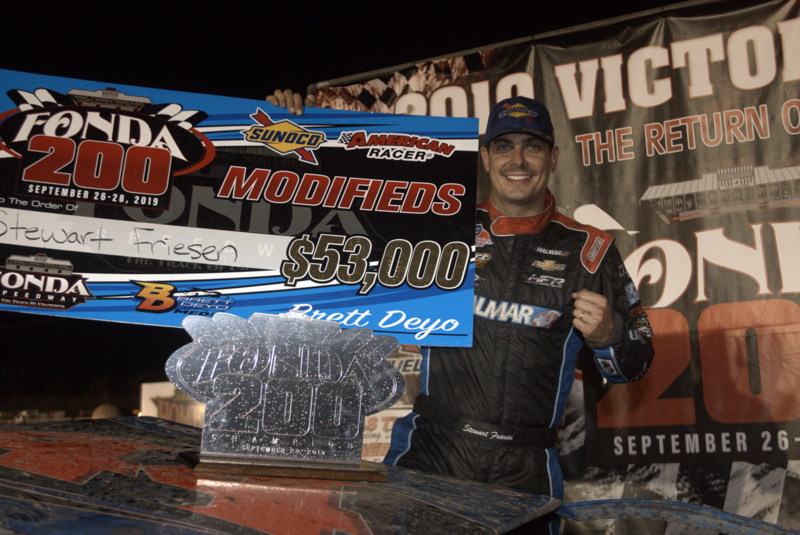 Fonda, NY – Not even a two hour rain delay could ruin the excitement and prestige of the “Fonda 200” which was run on Saturday at the “Track of Champions” Fonda Speedway for the first time since 2002. When the final checkered flag flew at the end of 200 laps, Stewart Friesen was the winner of the big prize for his sixth win of the 2019 season and the 60th of his career at Fonda.

“These people over here are like a family to me,” Friesen said as he pointed to his crew. “This was a very special win that we are going to do celebrate for sure.”

A 25-lap feature was also held for the Swagger Factory Apparel Crate 602 Sportsman with 2019 Track Champion Tim Hartman Jr. taking home the $1,500 win for his seventh win of the season and the 11th of his career in the division.

Ed Biittig Sr. opened up the racing program by saying “first of all Ladies and Gentleman, Bob James is a personal friend of mine and I want to thank everyone for their help raising money for Bob with a “Helmet Drive” by the drivers in the pit area who went through the grandstand to collect money for him.”

“I also want to thank all of the safety people that are always here to help in any situation at the race track. I worry about safety more than anything. I also want to thank the military for making this a free country for all of us to enjoy what we love to do. Fonda Speedway is living proof that a comeback can be made by the racers and the fans because of the efforts of Brett and Heather Deyo and their staff.”

Farmers Insurance sponsored the giveaways during the intermission as they did all season long with goodies being thrown to the crowd from the starters stand.

Pre-Race ceremonies started the 28th version of the “Fonda 200” with Stephanie May performing the Canadian National Anthem while Fonda Speedway’s own Mimi Lazzaro performed the National Anthem which was signed to the crowd by Lori Scanlon.

Jeremy Jarosz of Lake George, NY took home the $6,071 50/50 prize on Saturday night! Congratulations and thank you to all of the fans who bought tickets from our 50/50 ladies and gentlemen all season!

Drivers were then introduced while their racecars were lined up on the front straightaway. A group photo was taken of all the drivers in the starting lineup in front of the 2019 victory lane sign for the “Fonda 200”. The field was paced by the Fuccillo Automotive Group Pace Truck and the Sampson Motor Car Pace Car along with the #112 “Batmobile” that was driven to the win at Super Dirt Week in 1980 by Gary Balough. Balough was on hand at the track all weekend long at the museum, greeting fans with the car also on display.

After a four wide salute to the fans by the 40 car starting field, Joe Kriss threw the green flag to start the event with pole starter Stewart Friesen the early race leader. An early yellow was out at the completion of lap one for Alex Yankowski who was in the wall in turn two with yellow flag laps counting up to a maximum of three laps in the event. Friesen chose the outside for the restart with Rocky Warner, Andy Bachetti, and Brett Hearn all getting by Josh Hohenforst who fell quickly through the field.

Lap 10 saw lap traffic come into play as Bachetti and Hearn got by Warner for position only to have Warner get back by them on the next lap. Another yellow flag was out on lap 14 and on this restart Friesen chose the bottom with Warner now the second place car chasing the leader. Contact was made between Warner and Bachetti on the restart as they both tried to get down low into turn one but both continued on without any damage.

A close call for Friesen on lap 37 as he and the lap car of Alex Tonkin came together on the front stretch but both continued on without any issues. Friesen and all of the other drivers were trying to keep their cars as straight as possible without sliding sideways too much to try and preserve their tire wear as everyone knew it would be an issue during the event.

Just after the 50-lap mark in the event, cars starting pitting as strategy came into play in the long distance race. When lap 74 was completed rain started to fall as the red flag came out and the cars were directed to the hot pit area. The top five at that point consisted of Friesen, Warner, David Schilling, Brett Hearn, and Jessica Friesen.

After almost a two hour rain delay the cars were back out on the track but 20 of them went back to the hot pit as part of their strategy for the event. Friesen who was the leader at that point was one of the cars that pitted handing the lead over to Warner with Matt Sheppard, Billy Decker, Scott Huber, and Matt DeLorenzo the new top five.

Matt DeLorenzo set the quickest lap of the race and was the new third place car on the restart of the race with Sheppard, DeLorenzo, and Decker three wide for the second position on lap 87. Sheppard held his position at that point but on lap 94, Sheppard got alongside of Warner for the lead. At the completion of the lap, Sheppard was the new race leader and he led the lead over the remaining laps to the halfway point with the top five at lap 100 consisting of Sheppard, Warner, DeLorenzo, Danny Varin, and Brian Gleason.

At lap 100 drivers were given the choice of going to the hot pit to change tires or setups and restart at the end of the lead lap cars or go to the infield to pit for tear offs, adjust air pressures, and refuel with no loss of position. Sheppard went to the hot pit to make adjustments to his car as did Warner relinquishing the lead to DeLorenzo at that point in the event.

Friesen pitted on the infield and restarted in the sixth position when the green flag flew again but one lap later he was up two positions to fourth. On lap 102, Friesen made a three wide move in turn four to go down the middle of both Mike Mahaney and Danny Varin for the second position. Friesen closed in quickly on DeLorenzo and on lap 107 made a move on the inside of turn two to take over the race lead.

By lap 111 Friesen pulled away to a straightaway advantage with Sheppard already up to the fifth position on lap 124 after restarting 20th after the break at halfway. Danny Varin was the new second place car on lap 131 after getting by DeLorenzo with Friesen now a half track ahead of his closest competitor in heavy lap traffic.

The yellow was out on lap 135 for Varin who pulled behind the wall and was done for the evening at that point after a great run. With 50-laps remaining in the event, Friesen held a straightaway advantage over the new second place car of Sheppard, DeLorenzo, Warner, and Mahaney. Five laps later Sheppard was closing in on the leader who was having a little bit of a hard time negotiating lap traffic while Warner moved ahead of DeLorenzo for the third position.

Friesen chose the outside on a lap 178 restart, with Sheppard getting by for the lead as the two exited turn two. By the time the two crossed the finish line to complete the lap however, Friesen had gotten back by Sheppard to get his lead back. It was the final time through the end of the event that Friesen would choose the outside on the restart as from that point on, he restarted on the inside of the front row.

The yellow was out again on the restart for a three car wreck involving DeLorenzo who spun in turn three collecting the cars of Roger Henion Jr. and Ancel Collins in the process. Friesen restarted on the inside to protect his position and pulled away on the restart with Brett Hearn who had the freshest tires of all of the top ten cars moving up four spots to the sixth position.

Friesen pulled away with a little over 10 laps to go but when he encountered lap traffic on lap 193 that changed everything as he was having issues getting by the lap car allowing Sheppard to close in. On the final lap Sheppard was close enough in turn four coming down for the checkered flag to mount a challenge but slid up high in the turn allowing Friesen to take the win.

Sheppard finished second but was disqualified in post-race inspection for a weight infraction moving Warner up to the second finishing position. Mahaney, Decker, and Hearn completed the top five.

“I knew at some point in the race that I would be back in the field and have to get back to the front,” Friesen said. “I struggled to get by the lap cars on the outside and that allowed Matt (Sheppard) to close in on me. I made the mistake of giving him the bottom on that one restart and that was the last time that I did that.”

“Definitely a nice payday,” Warner said after finding out he finished second after the Sheppard disqualification. “My tires were shot at the halfway break and we got caught with our pants down. The track rubbered up again after the rain and I was able to get back to the front. Stewart was running the middle and I don’t know what he had but I couldn’t run that line.”

Brian Borst led at the start of the 25-lap Swagger factory Apparel Crate 602 Sportsman feature after starting on the front row with 2019 track champion Tim Hartman Jr. in tow. Hartman took over the lead on lap three on the outside of turn two and was already in lap traffic by the time the lap counter was on lap nine.

Cody Clark started the event in the seventh position but by lap 11 he had gotten by both Joe Williams and a lap car up to the fourth spot. Borst closed in on Hartman in lap traffic on lap 12 while Clark moved past Mark Mortensen for the third position. Ninth place starter Chad Edwards also got by Mortensen for the fourth position with Borst pressuring the leader with only five laps to go.

The yellow was out with only two laps remaining in the event and on the restart Hartman continued to lead while Edwards got by Borst for the second position. Hartman went on to the win, his seventh of the season and the 11th of his career in the division over Edwards, Williams, Mortensen, and Borst.

“It definitely helped that we started on the front row,” Hartman said after the race. “We made the right adjustments after the track was watered but I definitely didn’t want to see that last caution even though it worked out in my favor.”

That concluded the 2019 racing season at the “Track of Champions” but please stay up to date during the off season on our website www.thefondaspeedway.com and also on our Facebook page.