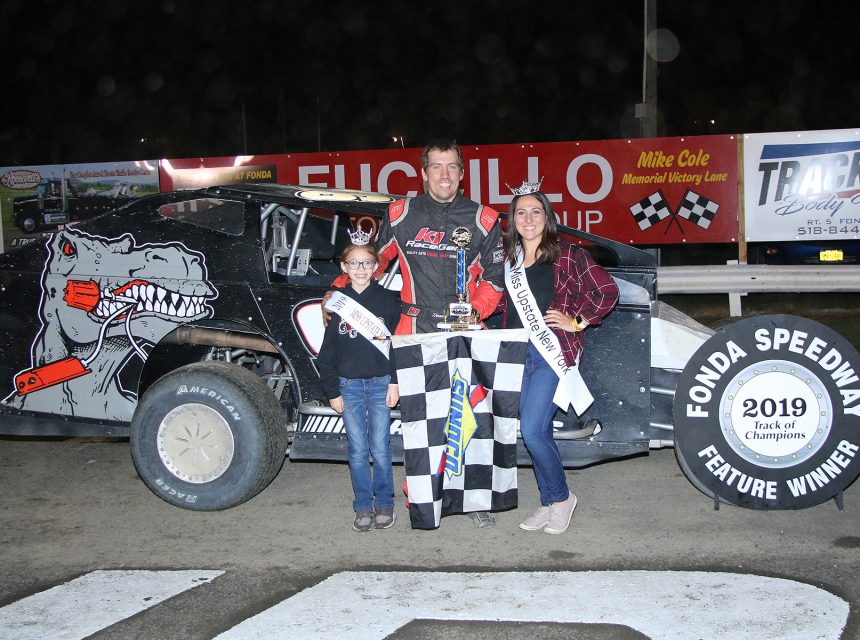 Fonda, NY – The 2019 regular season at the “Track of Champions” Fonda Speedway is now complete after Benjamin Moore Paints “Championship Night” was held on Saturday evening. On Saturday evening, one driver continued his success at Fonda this season while another made history, along with his car owner, after winning the Sunoco Modified Track Championship.

Danny Varin was a winner in the Sunoco Modified division for the third time this season in his best season ever at Fonda. The win came in the Ed Munger owned, Magsarus sponsored “T-Rex Express” Hig-Fab built car and it was his 10th career win at the Montgomery County Fairgrounds track.

The history referred to above was made by Rocky Warner who drove the Jake Spraker owned #1J Teo car to his first Sunoco Modified title at the track. It was wasn’t the first title at Fonda for Warner however as he now has a track title in all four of the divisions that he has ever competed in at Fonda, a milestone that may never be reached again.

Fonda Speedway promoter Brett Deyo started opening ceremonies for the evening by saying “I want to say thank you to all my staff and I appreciate everyone coming here this year to take a chance on us as we were all new. Fans came out on opening night under cold temperatures and you kept coming back and I appreciate that very much.”

“Thanks to the Fonda Fair Board as well for allowing me the opportunity to run their track,” Deyo continued to say. “They have been great to work with and have done many things that they didn’t have to do for us.”

“This has been an amazing season at Fonda,” Ed Biittig Sr. said during his invocation. “We don’t always know what people sitting next to us in the grandstands or bleachers are going through, but we are all family here at the track and we care about everyone’s losses whether they are humans or pets. We are blessed to get Brett Deyo and his staff here to run the Fonda Speedway and we thank them for this turnaround this year because Fonda Speedway is back.”

Mimi Lazzaro did her usual amazing job singing the National Anthem before the racing action started.

The 30-lap Sunoco Modified feature was an exciting lead swapping affair among four different drivers who led laps in the event starting with Korey Wilder who led at the drop of the green flag followed by fourth place starter Cody Bleau. Bleau got by Wilder for the race lead on the inside of turn four on lap six with the yellow out one lap later.

On the restart, Wilder took the lead back with eighth place starter Dave Constantino making his way forward to the third position by lap ten when Bleau got by Wilder for the lead on the inside of turn two. Constantino was next to lead the event after a pass on Bleau on the outside of turns one and two. The caution was out again on lap 13 when Bobby Varin came to a stop on the backstretch, he would drive to the hot pit and restart at the rear of the field.

Bleau took the lead away on the restart and when he and Constantino entered turn two, contact was made resulting in Constantino crashing hard into the backstretch wall ending his evening. On the restart, 11th place starter Danny Varin was the new second place car behind Bleau with Jessica Friesen, 12th place starter Rocky Warner, and fifth place starter Michael Maresca completing the top five at the halfway point.

The final yellow of the event was out just after Joe Kriss gave the halfway signal with his flags for Vincent Visconti who crashed into the backstretch wall. On this restart, Danny Varin was the new race leader with Warner getting the second position behind Varin. Warner gave chase but despite Varin being in lap traffic during the final five laps he was able to go on to the win followed by Warner, Bleau, Friesen, and David Schilling.
Bobby Varin made his way through the field to finish sixth after restarting at the rear of the field after pitting on lap 13.

“This car has been on rails,” Varin said in victory lane. I have to thank Jerry Higbie at Hig-Fab, car owner Ed Munger, and Dan Bedell for all that they do for me.”

“We came into this year and never expected this,” Warner said during the championship ceremony on victory lane. “We first worked out a deal to run Sportsman this year, then changed again to Modifieds, and I have to thank all of the people who stood by me and supported me this year.”

Joe Williams led at the start of the 25-lap Swagger factory Apparel Crate 602 Sportsman feature from his outside front row starting position with Brian Borst in tow. The red flag was out at the completion of lap one for Griffen Mansmith who flipped his car in turn three, ending up in the tire wall when the car settled down. He was not injured in the wreck.

Williams continued to lead on the restart with the top five on lap 10 consisting of Williams, Borst, fourth place starter Joe Orlando, seventh place starter Adam McAuliffe, and eighth place starter Andrew Buff. Williams was a straightaway ahead on lap 13 with McAuliffe getting by Borst for the second position on lap 15.

Williams was in lap traffic on lap 16 when the yellow came out for the car of Ryan McCartney who slowed on the backstretch and drove to the pit area. Williams continued to lead on the restart with McAuliffe applying heavy pressure lap after lap until getting the lead on the outside at the finish line to complete lap 21.

McAuliffe hung on for his second win of the season and the 10th of his career in the division at Fonda in the Ed McAuliffe Trucking #234 DKM Cyclone car over Williams, ninth place starter Brian Calabrese, Buff, and Borst.

“Tonight we just stuck with it and were able to get the win,” McAuliffe told Mimi Lazzaro in victory lane.

“This is pretty cool considering that we didn’t really plan on running here regularly,” Hartman Jr. said of his first career championship in the division. “We finished good three races in a row early in the season, got the point lead, and then we had to keep running here. This is a good reward for all of the hard work the crew put into this car the entire season.”

The only yellow flag was out on lap 11 for Brett Mortensen and Michael McCallion who were involved in a hard crash in turn four. The wreck started when Mortensen spun trying to avoid contact with the rear of Wagoner’s car and McCallion driving into the rear of Mortensen’s car at full speed with no yellow being thrown early enough to avoid the crash. Mortensen’s car did a 360 degree spin after the contact by McCallion but fortunately neither were hurt in the hard crash.

McAuliffe went on to the win, his fifth of the season and the sixth of his career in the division over Rich Christman, Alan Hanson, Steve Wagoner, and John Young.

“Last week I made a wrong call and ran out of fuel,” McAuliffe said in victory lane. “This week I put a little more fuel in the car but I was really nervous because I wanted to go out and get a win tonight before I move up out of the Limited division.”

Chuck Dumblewski was the pole position starter for the 20-lap Algonkin Motel Pro Stock feature and took the lead at the start of the event. The yellow was out at the completion of lap one for a three car crash in turns one and two with Dumblewski continuing to lead on the restart. Dumblewski stretched out his advantage lap after lap while the top two in points, Luke Horning and Nick Stone made their way to the front.

Horning started in the ninth position while Stone started 12th but both were running in the top five by lap five. Horning and Stone were both able to get by Jason Morrison for the second and third positions on lap eight with Dumblewski out to a half straightaway advantage. Just as it appeared Dumblewski would drive to an easy win the yellow came out with two laps to go for debris on the track between turns one and two.

On the restart, Horning took the lead away from Dumblewski and went on to his sixth win of the season and the 20th of his career in the division in the Catalytic Recovery #97 tribute car to Don Warner over Dumblewski, Stone, Morrison, and seventh place starter Josh Coonradt.

“We were a second place car before that last caution,” Horning said. “But when the yellow came out I knew I had a chance at the win.”

“The staff here at Fonda have come in and really turned things around,” Horning said of his first track title at Fonda in the division. “This is what I was hoping to do, get the win tonight to seal up the title.”

Cliff Haslun led every lap in the 15-lap Trackside Body Works Street Stock feature for his first win of the season and the fifth of his career in the division over 2019 Track Champion Jason Samrov, Michael Arnold, Dave Horning Sr., and Josh Samrov.
“This feels great and it’s been a long time coming,” Track Champion Jason Samrov said to celebrate his title in the division. “This is a brand new car for us this season and after five wins
this season, it feels great.”

Ken Hollenbeck led all laps in the 12-lap Four Cylinder Cruiser feature for his sixth win of the season and the 48th of his career in the division over Cole Lawton, Josh Kane, PJ Bleau, and John Napoli.

“I lave Fonda Speedway,” Hollenbeck said while celebrating his sixth championship in the division. “Brett Deyo and his crew did a great job here this year.”

After a break for the annual Fonda Fair, the Fonda Speedway will be back in action on Saturday, September 14 for a full racing program in all divisions along with the CRSA Sprints and Mohawk Valley Vintage Dirt Modified Series (MVVDMS). Starting time for that event will be 6:00 p.m.