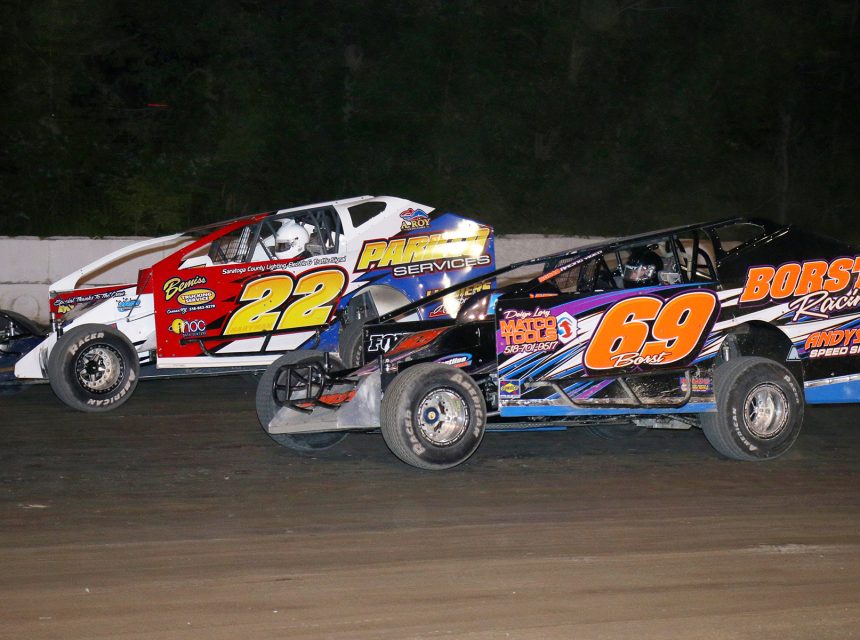 Fonda, NY – It is certainly hard to believe that the 2019 regular season at Fonda is almost over. But with the reality that this Saturday, August 10 is “Benjamin Moore Paints Championship Night” at the “Track of Champions”, it unfortunately is.

Saturday, August 10 will be the final point race of the 2019 season with Track Champions to be crowned in all divisions before the Montgomery County Fairgrounds closes for a few weeks for the annual Fonda Fair.

On the racing card, this Saturday, August 10 will be the Sunoco Racing Modifieds, the Swagger Factory Apparel Crate 602 Sportsman ($1,000 to win Thanks to Eric Orozco Racing), the Montgomery County Office for Aging, Inc. Limited Sportsman, the Algonkin Motel Pro Stocks, the Trackside Body Works Street Stocks, and the Four Cylinder Cruisers.

The Mohawk Valley Vintage Dirt Modified Series (MVVDMS) will also be at the Fonda Speedway this Saturday, August 10 in a “Bonus Race” which will be a non-point show for the competitors with all the racing action set to begin at 7:00 p.m.

The Fonda Speedway Kid’s Club will also be having a Backpack Giveaways this Saturday, August 10 so if you or your race team would like to donate a backpack please see Ashley Abeling at the Kid’s Club location at the track, which is at gate two underneath the covered grandstands.

Looking at the current point standings in all divisions going into this Saturday, August 10 in the Sunoco Modified division, Rocky Warner leads the way with 765 points on the strength of five feature wins, 10 top five, and 15 top 10 finishes.

Warner will become the 2019 Sunoco Modified Track Champion by starting the feature event this Saturday, August 10 and with this championship, Warner has now won a championship in all four of the divisions that he has competed in during his career at Fonda, a truly historic moment for him and for the Fonda Speedway as well.

So come and join us on Saturday evening August 10 at the “Track of Champions” Fonda Speedway to see which drivers will be crowned the 2019 Track Champions!