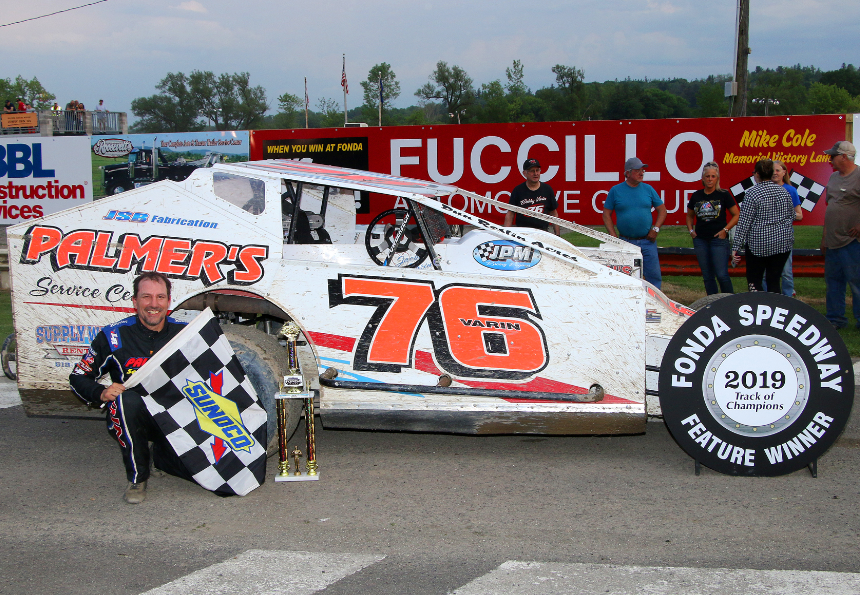 Fonda, NY – On Saturday, August 3 at the “Track of Champions” Fonda Speedway, longtime supporters of the track Alton and Carole Palmer of Palmer’s Service Center will present “Dollar Dog Night” with hot dogs sold at the concession stands for only $1! Racing will begin at 7:00 p.m.

On the racing card that evening will be the Sunoco Racing Modifieds, the Swagger Factory Apparel Crate 602 Sportsman $1,000 to win thanks to Eric Orozco Racing, the Montgomery County Office for Aging Inc. Limited Sportsman, the Algonkin Motel Pro Stock “Best of 8” Series $800 to win presented by American Racer Tire, the Trackside Body Works Street Stocks, and the Four Cylinder Cruisers.

Taking a look at the 2019 regular season so far with only two point races remaining before the track shuts down for the annual Fonda Fair, there have been 14 events held for the Sunoco Modified division with seven different drivers winning those events led by current point leader Rocky Warner with five victories. Stewart Friesen is next with three wins while Danny Varin has two. Single wins have gone to four different drivers including Matt Sheppard, Dave Constantino, Bobby Varin, and Mike Maresca. For Constantino it was his first career win in the division at Fonda.

Five different drivers have won the 11 races held in the Montgomery County Office for Aging Inc. Limited Sportsman division with current point leader EJ McAuliffe leading the category with four feature victories. Rich Christman is next with three feature wins followed by first year driver Brett Mortensen who has two wins while Steve Wagoner and Michael McCallion both have one win apiece. For Christman, Mortensen, and Wagoner it was their first career wins in the division.

The Algonkin Motel Pro Stocks have raced 11 times with five different winners in that division led by Luke Horning with five wins, which gives him the point lead going into this week’s racing events. Kenny Gates and Nick Stone both have two feature wins apiece while Ivan Joslin and Josh Coonradt both have one win apiece with the win for Coonradt coming in the prestigious “Hondo Classic” event back in June.

The Trackside Body Works Street Stocks have raced 11 times in 2019 with four different winners taking the victories in those events led by point leader Jason Samrov and Dave Horning Sr. who both have four victories apiece. Stephen Young and Michael Arnold are the other two winning drivers, Young with two victories while Arnold has one single win.

Ken Hollenback has dominated the Four Cylinder Cruiser division with four victories in the six total events held with first time winner in the division Cole Lawton winning the other two races. Hollenback is also the current point leader.

All three of these drivers will be on hand before the races this Saturday afternoon with their racecars on display. Be sure to stay and browse through the many exhibits and displays that encompass the storied history of the “Track of Champions” in the Fonda Speedway Hall of Fame and Museum.

We look forward to seeing you this Saturday at the Fonda Speedway Hall of Fame and Museum, where the past comes back to life!