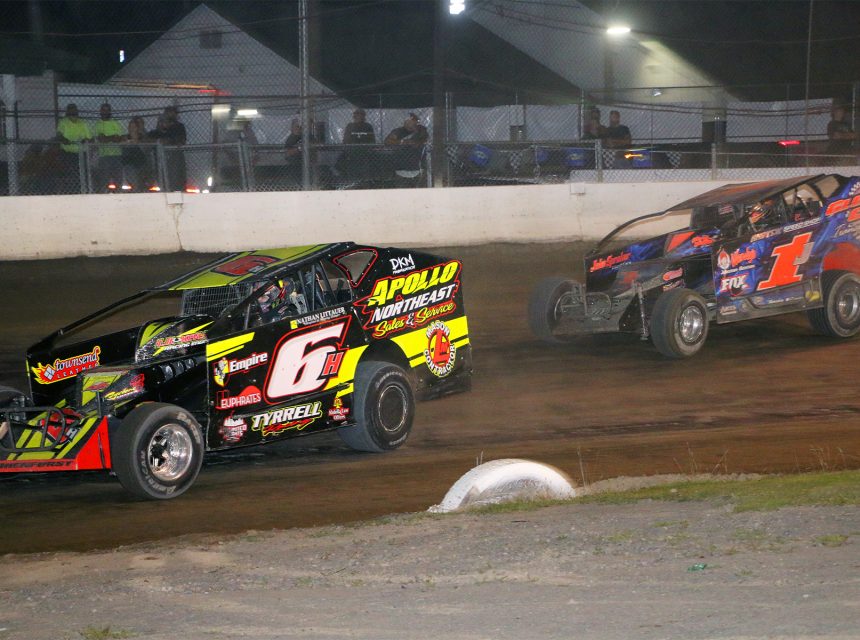 Fonda, NY – According to Rocky Warner who stood in the Fuccillo Automotive Group Mike Cole Memorial victory lane at Fonda after his victory, car owner Jake Spraker told him over the winter that he had the best stuff that you can buy and that he had better get the job done. Warner definitely listened to his car owner as he went to victory lane again at the Fonda Speedway on Saturday evening for the fifth time in 2019 and the sixth time in his career in the Sunoco Modified division at Fonda.

Last lap passes out of turn four have become the norm at Fonda this season proving that drivers never give up looking to go to victory lane at a historic place like the “Track of Champions” Fonda Speedway. The track was in fantastic shape on Saturday allowing for Warner and others to make their passes as they raced to the checkered flag in their respective divisions.

Other winners on MW Roosevelt & Sons Night at Fonda were Nick Scavia in the Swagger Factory Apparel 602 Crate Sportsman $1,000 to win feature thanks to Eric Orozco Racing, Michael McCallion in the Montgomery County Office for Aging Inc. Limited Sportsman, Nick Stone in the Algonkin Motel Pro Stock Best of 8 feature presented by American Racer for $800 to win, Jason Samrov in the Trackside Body Works Street Stocks, and Mike Kiser in the CRSA 305 Sprint Cars.

Ed Biittig Sr. started opening ceremonies with a prayer and a moment of silence for three people that recently passed away including Gerald Rose who owned a car that was once driven by Lou Lazzaro, Wayne Podbielski who used to own the #14R car that was driven to many wins by Ryan Odasz, and Otto Graham who was a driver, photographer, and friend to many people.

2019 Miss Montgomery County Outstanding Teen Amelia Baldwin performed the National Anthem and did a great job getting an ovation from the large crowd on hand. Also in attendance was Farmers Insurance representative Todd Cipperly, whose organization Farmers Insurance has been handing out goodies to the crowd during intermission all season long on behalf of the company.

Scott Huber and Brian Pessolano started the 30-lap Sunoco Modified feature on the front row with Huber the early race leader. Josh Hohenforst started the event in the fourth position and by lap two he was already in the second spot. Coming down the front straightaway to complete lap three, Hohenforst was the new race leader and by lap six he was in lap traffic, a full straightaway ahead of Huber.

Rocky Warner and Stewart Friesen started the event in the 10th and 11th positions respectively and both were coming up through the field together, passing two cars at once at times to get to the third and fourth positions by lap nine. Warner and Friesen both got by Huber for the second and third positions at the halfway point in the event with Hohenforst out to a big lead followed by Warner, Friesen, Huber, and sixth place starter David Schilling.

At the time Warner took over the second position from Huber, Hohenforst was over five seconds ahead but Warner quickly closed that gap to just over a second with a few laps to go. On lap 24 there were two lap cars racing side by side just in front of the leader, slowing him down enough that Warner and Friesen were able to make it a three car battle for the victory.

Hohenforst was using the extreme outside groove to get around the track early on but late in the event he switched lanes to the inside as he tried to hold on for his first victory of the 2019 season. With two laps to go, Hohenforst cleared the lap car of Korey Wilder which gave him a little breathing room but it wasn’t enough as Warner just kept coming with that “never give up attitude”.

Coming out of turn four on the final lap, Hohenforst and Warner were side by side, Hohenforst on the inside and Warner on the outside in a thrilling race to the checkered flag. Warner was able to take the victory, finishing just 0.236 secs ahead of Hohenforst who was followed by Friesen, Schilling, and Huber with a fantastic run in the fifth position.

“There was a time during the feature where I didn’t really know what position I was running in,” Warner told Mimi Lazzaro in victory lane. “I thought that Huber had a big lead when I passed him but it was actually Josh (Hohenforst) who was out front. I saw that he was running low so I had no choice but to run the outside if I wanted to get the win.”

Kurtis Hohensheldt used his pole position start to his advantage leading at the drop of the green flag in the Swagger Factory Apparel 602 Crate Sportsman feature. Two consecutive yellow flags slowed the field on laps two and three and on the restart fourth place starter Andrew Buff was the new race leader.

Ninth place starter Nick Scavia made some great moves coming up through the field and sat in the second position on lap three with 11th place starter Mark Mortensen also passing many cars up to the top five by lap four. Buff continued to lead with Scavia hounding him in every turn of every lap while Mortensen continued to pick off cars into the third position on lap 10 after getting by Hohensheldt.

Buff and Scavia raced hard and clean as the laps continued to count down to the checkered flag with Scavia finally getting by Buff for the race lead with a move to the inside of the leader in turn two on lap 23. Mortensen also got by Buff for the second position with one lap to go as did 10th place starter Adam McAuliffe for the third spot.

Both Mortensen and McAuliffe ran out of time to challenge Scavia who did a masterful job in lap traffic to close out the event for his first win of the season and the fifth of his career in the division at Fonda. Mortensen, McAuliffe, seventh place starter Cody Clark, and Buff completed the top five in the event with four out of the five cars in the top five “Cyclone’s” fabricated by DKM.

Scavia held a DKM flag as he celebrated on the roof of his North Country Electrical LLC. #17 car in victory lane and afterwards told Mimi Lazzaro: “it’s been a pretty tough year so far”. “We got this new car this year and have been trying to figure it out but I think we found something tonight. I’ve raced hard with Andrew (Buff) back in the day and we raced hard again tonight just as we did back then.”

Michael McCallion led at the start of the 20-lap Montgomery County Office for Aging Inc. feature event with first year racer Brett Mortensen in the third position on lap two after starting seventh while ninth place starter EJ McAuliffe was right behind Mortensen in third. Bill Port spun in turn four on lap four bringing out the caution flag and closing up the field behind McCallion who had a big lead to that point.

Another caution fell on the restart when second place runner Steve Wagoner went hard into the turn one wall but fortunately he was okay after the crash. On this restart, Mortensen and McAuliffe were now the second and third place cars but once again McCallion was able to pull out to a big lead leaving the best race on track for the second position between Mortensen and McAuliffe.

McCallion pulled away for his first win of the season and the second of his career in the division with Mortensen, McAuliffe, eighth place starter Rich Christman, and Alan Hanson completing the top five in the event.

The $800 to win Best of 8 Series presented by American Racer Pro Stock feature saw a yellow flag out with no laps complete when leader Jason Morrison’s car backfired out of the exhaust and slowed on the backstretch causing the field to bunch up behind with many cars involved in the wreck including point leader Luke Horning, Ivan Joslin, Justin Knight, and others.

Gates made a great move to complete lap eight at the line as he got by both Coonradt and Morrison for the race lead. Attention now turned to ninth place starter Nick Stone who made his way up to the fourth position when the caution came out on lap 13. Stone was the new second place car on the restart and three laps later he swung around the outside of Gates in turn four to take over the lead.

Stone went on to his second consecutive win, his second win of the season and the 44th of his career in the division over Coonradt who got by Gates on the final lap for second, Gates, 10th place starter Devon Camenga who raced to his best career finish in the division, and Morrison.

“I think we got the car pretty god now,” Stone said in victory lane. “The track had some bite in it tonight and I used it to get to front.”

Michael Arnold led the first eight laps in the 15-lap Trackside Body Works Street Stock feature event before sixth place starter Jason Samrov took over the race lead on lap nine. Fifth place starter Dave Horning Sr. was the new second place car on lap 13 but had nothing for Samrov who went on to his fourth win of the season and the 12th of his career in the division over Horning Sr., Arnold, Al Relyea, and Cliff Haslun.

The 20-lap CRSA Sprint feature didn’t get off to a very good start with Johnny Kolosek flipping his car on the front straightaway bringing out the red flag. He was not injured in the single car wreck. On the original restart, Darryl Ruggles bounced off another car into the wall in turn four bringing out the caution with no laps complete.

Thomas Radivoy led the race on the third try at the start and led the event up until lap eight when Sydney Prince took over the top spot. At the halfway point in the event Prince continued to lead with Radivoy, Emily VanInwegen, ninth place starter Mike Kiser, and Justin Mills completing the top five.

Kiser moved into the second position on lap 17 with Prince now in lap traffic allowing Kiser to close in quickly on the leader. On the final lap in turns three and four, Kiser went low under both Prince and a lap car for the race lead and he went on to take the checkered flag for his second career CRSA win at Fonda. Prince, Radivoy, Mills, and 19th place starter Jeff Trombley completed the top five.

“I’m glad to be back racing 305 Sprints again,” Kiser said in victory lane. “I thought that I was coming here to race for $300 to win but it ended up being a lot more.”

Next Saturday, August 3 at Fonda, Palmer’s Service Center presents “Dollar Dog Night” with hot dogs being sold at the concession stands for only $1! All divisions will be in action including the Four Cylinder Cruisers with a starting time of 7:00 p.m.