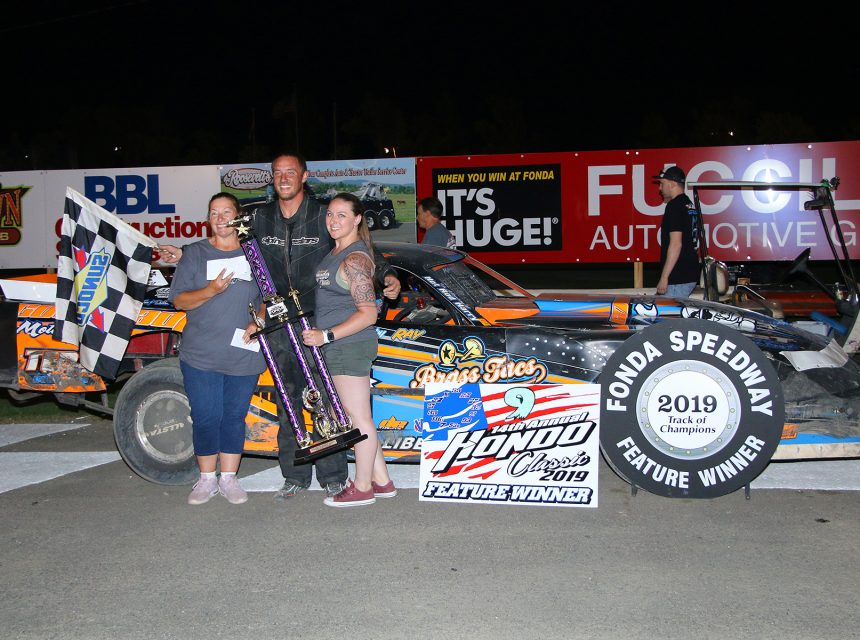 Fonda, NY – On Saturday evening a $5 admission price brought out a huge crowd to the “Track of Champions” Fonda Speedway for School House Pools Night with the main event consisting of the 14th Annual Hondo Classic for the Algonkin Motel Pro Stocks. There was a first time winner taking the victory in that event as Josh Coonradt crossed under Joe Kriss’ checkered flag first, scoring his first win in the prestigious event. It was Coonradt’s first win of the 2019 season and the fourth of his career at Fonda.

The other special event on the racing card was the 5th Annual Bill Ag Memorial Match Races for the Sunoco Modifieds and when the final checkered flag flew on the event it was Stewart Friesen taking the $1,200 main event after defeating Rocky Warner for the race win. “This is a very special event honoring Bill from the Winners Circle,” Friesen said in the Fuccillo Automotive Group Mike Cole Victory Lane. “This is a cool mid-summer special race that has become a big event so thanks to all the sponsors and the organizers for their efforts.”

Joe Kriss performed the National Anthem during opening race ceremonies at the beginning of the night with the 50/50 worth $2723 to the winner.

Scott Huber and Steve Akers started the 30-lap Sunoco Modified main event on the front row with Huber the early race leader. The red flag was out on lap three when defending track champion Bobby Varin got into the tractor tire on the outside of turn four at the entrance to the pit area by the Cow Palace. It was a hard hit for Varin but he was able to drive away, make a quick trip to the hot pit area to inspect the car, and restart at the rear of the field.

Huber maintained the lead on the restart with Jessica Friesen making her way into the fourth position after starting sixth and her husband Stewart Friesen following her through for the fifth position after they both got by Brian Gleason. Third place starter Craig Hanson got by Huber for the lead on the outside of turns one and two on lap five while 11th place starter Rocky Warner was also moving up quickly, getting by both Stewart and Jessica Friesen for the third position on lap seven.

The lead was brief however as Warner used the high side on the backstretch to retake the lead and once he cleared the lap cars of Danny Creeden and Bobby Varin he was home free and on his way to another victory in the Jake Spraker Used Cars #1J Teo car over Stewart Friesen, Schilling, Hanson, and Jessica Friesen. For Warner it was his fourth win of the season and the fifth of his career in the division at Fonda.

“Pinch me and make sure this is for real,” Warner told Mimi Lazzaro in victory lane. “I felt as though the car was a little off tonight but once they watered the top of the track it was fast. Once I got by the lap cars I was able to go to the bottom and go on for the win. Right now I really don’t have an explanation for all of this success but thanks to Jake & Nancy Spraker, Teo Pro car, and Fox Shocks.”

The original start of the Swagger Factory Apparel 602 Crate Sportsman was called back and on the second try at it, it was fourth place starter Mark Mortensen who used the outside to get the lead over outside pole sitter Joe Orlando. Tim Hartman Jr. brought out the first caution of the event on lap three when he slowed on the front stretch. He was able to go to the hot pit for repairs and restart at the rear of the field.

Orlando took the lead away on the restart but by lap five Mortensen was back out front while seventh place starter Adam McAuliffe took the third position away from Chad Edwards on lap six and on the next lap he took the second position away from Orlando. While the 2011 602 Sportsman Track Champion Mortensen was out to a comfortable advantage it was ninth place starter Tony Farone who was on the move, going three wide to get by Edwards and Orlando for the third position.

A caution on lap 12 brought the field back to Mortensen who chose the inside line for the restart. Another no start situation ensued and on the second try Mortensen maintained his lead on what was this time a single file restart. McAuliffe was able to get a nose under Mortensen a couple of times going in to turn two but going down the backstretch Mortensen was able to maintain his lead position.

Once Farone started to challenge McAuliffe for the second position it allowed Mortensen to pull away, but Mortensen wasn’t holding back as he was setting some of the fastest laps of the race in the closing five laps of the event. Once Mortensen got by the lap cars of Griffen Mansmith and Kathy Bellen he was able to pull away slightly to take the win over McAuliffe, Farone, 11th place starter Brian Calabrese, and Orlando.

“It’s been a couple of rough weeks,” Mortensen told Mimi Lazzaro in victory lane. “We put in a lot of work on this car this week and for once I was able to get away on the restarts.”

The 20-lap Montgomery County Office for Aging Inc. Limited Sportsman feature started with Bill Port in the lead from his pole position start followed closely by Brett Mortensen. A yellow flag on lap five slowed the field and on the restart Mortensen was able to get the lead away from Port with sixth place starter Rich Christman now second and seventh place starter EJ McAuliffe third.

On lap 12 the top three were nose to tail for the lead but Mortensen was able to hold off all challenges with the final yellow flag in the event out at that point. On the restart, Christman was able to get the lead away from Mortensen with McAuliffe also getting by Mortensen for the second spot. The top two of Christman and McAuliffe pulled away at that point with Christman taking his third win of the season over McAuliffe, Mortensen, Brendan Gibbons, and Dylan Eldred.

Jim Normoyle led the opening lap of the 29-lap Hondo Classic for the Algonkin Motel Pro Stocks with the caution coming out early just after lap one was completed. Luke Horning actually took the race lead just after lap one was completed but the yellow flag took that back and put Normoyle back in the lead. On the restart however, Horning who started the race in the fifth position, took the race lead with Kenny Gates and Chuck Dumblewski the new top three cars.

Cautions plagued the event starting on lap 11 and on the restart Horning chose the inside line for the restart with Gates on the outside. Horning almost took the nose off of Gates’ car on the restart trying to get to the outside and the move was successful keeping Horning in the top spot. Josh Coonradt started the event in the 15th position but was the new fourth place car on lap 12 after getting by Normoyle for the position.

On the outside at the line to complete lap 14, Coonradt took over the race lead with another yellow coming out shortly afterwards. Coonradt chose the outside for the restart and Horning made the best of his inside front row starting spot to take over the lead again as the green flag flew. While Horning was leading just after halfway, Coonradt and Gates raced hard and clean for the second position which Coonradt was able to take away for good on a lap 16 restart.

The final yellow flag in the event was out on lap 18 and on the restart Horning was still the race leader while Coonradt and Justin Knight both were able to get by Gates for the second and third positions. Knight got by Coonradt for the second position on lap 20 and looked like he had something for Horning as the top five of Horning, Knight, Gates, Coonradt, and Dumblewski pulled away to make it their own race to the checkered flag.

Coonradt and Knight made a sandwich out of race leader Horning on lap 28, Knight on the inside and Coonradt in his familiar outside groove. Coonradt was able to clear both cars to take over the race lead at that point and held off the challenge of both Horning and Knight who raced hard and clean in a drag race to the finish line.

Coonradt was the winner for his first win of 2019 and the fourth of his career in the division over Horning, Knight, Gates, and Dumblewski.

What a race,” Coonradt said in victory lane. “I’m shocked. With five laps to go I thought that I had a fifth place car. Looking at that last restart I had Horning and Gates in front of me, two of the best in the business, now I just don’t know what to say.”

The Trackside Body Works Street Stock feature was an entertaining 15-lap event starting with Cliff Haslun who was the early race leader. Stephen Young started the event in the sixth position but didn’t stay back there for long as he was the new second place car on lap two. One lap later Young took the lead away from Haslun on the inside of the backstretch with Michael Arnold now second after also getting by Haslun.

Dave Horning Sr. and Jason Samrov took turns running in the second position late in the race but at the checkered flag it was Young the race winner followed by Zach Sorrentino, Arnold, Horning Sr., and Haslun. For Young it was his second win of the 2019 season and the third of his career at Fonda.

This Wednesday, July 3 the Fuccillo Automotive Group and Teo Pro Car will present the Firecracker 50 with a $10,000 to win Bob Hilbert Sportswear Short Track Super Series (STSS) Fueled by Sunoco Modified event along with a $2,000 to win STSS Crate 602 Sportsman Series event. There is $5,000 in lap money that is also being paid out in the Modified main event with a total cash prize purse of $39,200 for the event as advertised in a recent release.

John Lakata raised a total of $5,000 in lap money for the event and he also designed and created a beautiful, unique trophy for the event that was on display at the track on Saturday evening.