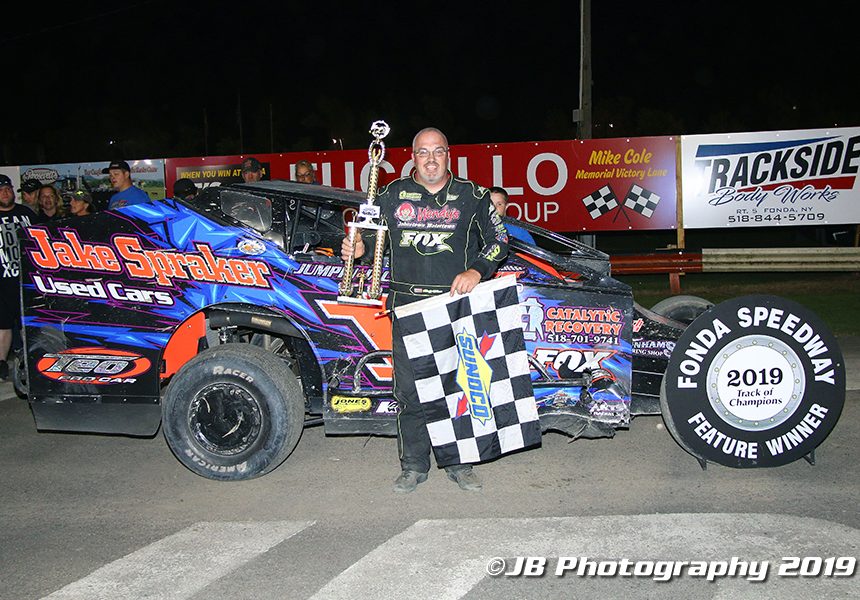 Fonda, NY – Race car drivers wear their emotions on their sleeves. It could be their first career victory or any victory at a historical place like Fonda, their first track championship, or a special win dedicated to a friend. That was the case Saturday evening at Fonda after Rocky Warner scored his third win of the season and the fourth of his career at Fonda in the 30-lap Sunoco Modified feature event.

Just as Mimi Lazzaro was completing her interview with Warner in the Fuccillo Automotive Group Mike Cole Memorial Victory Lane, Rocky had one more thing to say to complete his interview, “This one is for Jason Morrison.” Morrison was a longtime friend of Warner’s, from back in their high school days together right up to the present time, who passed away recently. Definitely an emotional moment for Warner and for everyone at the track on Saturday evening who witnessed it.

Cottrell was honored on victory lane by the MVVDMS coordinator Laurie Fallis along with Fonda Speedway promoter Brett Deyo.

“I retired in 2004,” Cottrell told the big crowd on hand at the “Track of Champions”. “It was hard not to keep racing but eventually your body gives out on you and you can’t compete to the level that you used to. I raced with a lot of good guys, Lou (Lazzaro), Dave (Lape), Jack (Johnson), the Dalmata’s, I raced for 34 years and drove cars of that quality (speaking of the Vintage cars safety aspect) and I’m still here as the cars fortunately are not like that anymore.”

Matt Noles was next to honor Cottrell on victory lane announcing that Cottrell was an inductee into the 2019 Class for the Fonda Speedway Hall of Fame.

Linda Brill-McDonald gave the invocation for opening race ceremonies before Stephanie May did a great rendition of the National Anthem. High School graduates were awarded $5 gift cards to the concession stands as the Fonda Speedway management honored them as well on Saturday evening.

Fonda Speedway promoter Brett Deyo filled in as a guest announcer in the absence of Paul Szmal and he along with Jay Severson did a great job keeping the crowd entertained. The 50/50 was worth $2,947 to a lucky person on Saturday evening.

Scott Huber led from the outside pole starting position in the Sunoco Modified 30-lap main event with front row starting mate Pep Corradi second. Defending track champion Bobby Varin was on the move early from his ninth place starting position, getting by Jessica Friesen for a spot in the top five on lap three.

Huber was out to a half straightaway advantage on lap seven when all of a sudden he had issues getting into the turns at speed as each time his car almost slowed to a stop. Corradi took over the lead from Huber on lap nine with Huber forced to retire from the event four laps later. Rocky Warner started the event in the 11th position and by lap 14 was in the fourth spot after getting by Steve Akers for the position.

At the halfway point the top five consisted of Corradi, Darwin Greene, Varin, Warner, and Akers. Corradi was out to a straightaway advantage on lap 16 with Warner picking off cars one by one, getting by both Varin and Greene for the second spot by lap 19. The yellow flag took away the big lead that Corradi had built up when Korey Wilder slowed in turn two with 10 laps to go.

Warner made the best of the restart as he took the lead away and immediately stretched out his advantage leaving the race for the second position as one to watch between four drivers, Corradi, Varin, Friesen, and 10th place starter Matt DeLorenzo. Warner went on for his third win of the 2019 season in the Jake Spraker Used cars #1J Teo car over Corradi who drove a great race to hold on to the second position, Varin, Friesen, and DeLorenzo.

“It was a lot of fun out there but I decided that I had to try something different during the race as it was starting out to be a follow the leader type race,” Warner said in victory lane. “So I stepped to the outside in turns one and two but when the bottom started taking rubber I moved back down there and went on to the win.”

The $1,000 to win (thanks to Eric Orozco racing) Swagger Factory Apparel 602 Crate Sportsman feature started with Dan Santabarbara as the early race leader with eighth place starter Tim Hartman Jr. somehow getting up to the fourth position by the time the field reached turn one. Hartman made quick work of both Nick Scavia and JaMike Sowle and was sitting in the second position by the time lap four was scored.

Coming out of turn four to complete lap eight, Hartman went around the outside of Santabarbara for the lead and pulled away from that point on leaving all the other drivers racing for the second position. Two consecutive yellow flags on lap eight saw many drivers going to the hot pit area for repairs but most were able to continue on at the rear of the field on the single file restart.

Lap traffic slowed the leader on lap 18, but it didn’t matter as he had a straightaway lead already built up. Santabarbara, Adam McAuliffe, and Nick Scavia battled throughout the closing laps for the second position as Hartman went on to his third win of the season and the seventh of his career in the division over Santabarbara, Scavia, McAuliffe, and Brian Borst.

“It seems as though whenever Rocky wins the Modified feature I am able to win our feature so I wish him continued success,” Hartman said in victory lane after exiting the Parillo Services #22 car. “We made changes just before the feature, when the cars were going out on to the track we were still on the jack.”

Brendan Gibbons started the Montgomery County Office for Aging Inc. Limited Sportsman feature from the third position but at the completion of lap one he was the race leader. First to challenge Gibbons for the lead was ninth place starter Rich Christman who raced side by side with Gibbons on lap for the lead on lap five with Gibbons able to hold on to the spot.

EJ McAuliffe started the event in the fifth position and on lap six got by Christman for the second spot. On the same lap, McAuliffe was able to also get by Gibbons for the lead and from there he went on to his fourth win of the season and the fifth of his career in the division over Christman, Gibbons, John Young, and 11th place starter Tucker O’Connor.

By far the most exciting race of the evening was the $800 to win, Algonkin Motel (Best of 8 Series event sponsored by American Racer Tires) Pro Stock feature event. Two different drivers led lap one, Buck Gasner at the drop of Joe Kriss’ green flag but John Roese as lap one was completed as they raced three wide with Cassidy Wilson for the lead coming out of turn four.

Cassidy Wilson got by Roese for the lead on lap two with Nick Stone also getting by Roese for the second spot. Stone was the new race leader on lap five after getting by Wilson for the spot with 12th place starter Luke Horning also getting by Wilson for the second spot. On the inside of turn four on lap seven, Horning took the race lead away from Stone as Josh Coonradt was now the new second place car on lap 10 after starting seventh.

Horning and Coonradt were side by side for the lead on lap 14 with Horning able to hang on to the position. Kenny Gates started the 20-lap event in the ninth position and was the new second place car with two laps to go after getting by Coonradt. Gates caught the leading car of Horning on the final lap with an epic battle resulting as the two raced to the checkered flag.

Gates was able to sneak by Horning for the lead in turn three on the final lap but Horning found some grip coming out of turn four as the two drivers drag raced side by side to the checkered flag. Horning was able to nose out Gates for his fifth win of the 2019 season and the 19th of his career in the division over Gates, Coonradt, Stone, and eighth place starter Chuck Dumblewski.

“I really didn’t mean to make things that exciting,” Horning said. “I thought that the top was the place to be but Gates proved that wrong. He got into turn three so hard and was able to get by me but I got back ahold of the outside in turn four and we drag raced to the win.”

Cliff Haslun led the 15-lap Trackside Body Works Street Stock feature at the start with Stephen Young second after starting sixth. On lap four, Jason Samrov took the second position away from Young with the yellow out on lap four for Young who suffered a right front flat tire. Young pitted for a new tire and restarted at the rear of the field.

On the restart Haslun got sideways in turn four allowing Samrov to get the lead away with Michael Arnold now in second. One more yellow flag slowed the field but Samrov was able to go on to his second consecutive win over Arnold, Young, Haslun, and Justin Taylor.

Fifth place starter Cole Lawton jumped up to the lead position at the start of the 12-lap Four Cylinder Cruiser feature and led up to lap seven when Josh Samrov took the lead away on the inside of turns three and four. Samrov went on to the win but was disqualified in post-race inspection giving the win to Lawton with John Napoli, Wayne Russell, TJ Marlitt, and Ken Hollenbeck completing the top five.

Next Saturday, June 29 School House Pools presents a very special racing program featuring a $5 admission price. On the racing card will be the 14th Annual Hondo Classic event for the Algonkin Motel Pro Stocks along with the rain delayed Bill Ag Memorial Match races for the Sunoco Modifieds. All other divisions will also be in action except for the Four Cylinder Cruisers. Starting time will be 7:00 p.m.