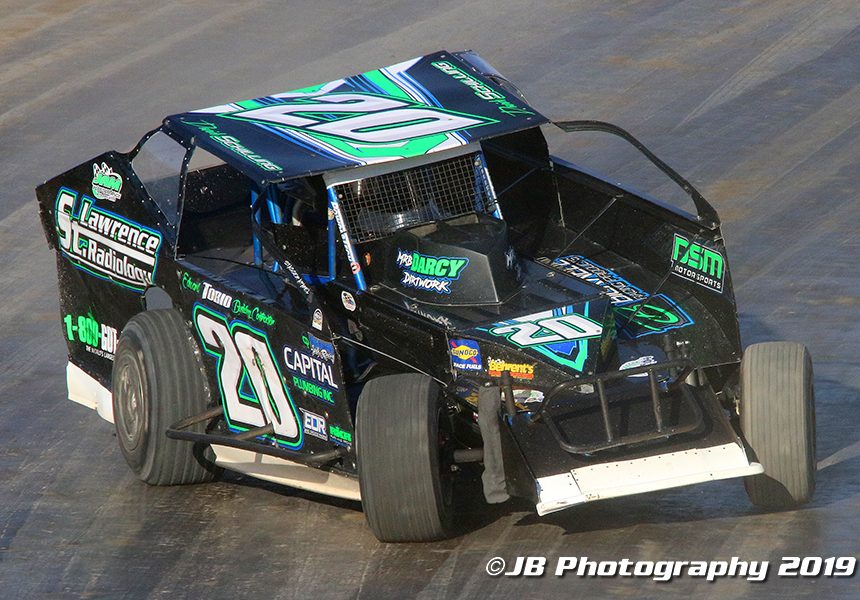 Fonda, NY – This Saturday, June 15 at the Fonda Speedway, The Bill Ag Elimination Match Race event for the Sunoco Modifieds will be held at the “Track of Champions”. This event is held in honor of the late Bill Anagnostopulos who was the owner of the Winners Circle, which is a restaurant in Fonda, NY that is located just around the corner from the speedway, where many drivers and fans frequent after the races on Saturday evenings.

Bill was a great friend to racing and sponsored many drivers at the speedway through the years. On a typical Saturday evening, he would get away from the restaurant to attend the races at Fonda where he had many friends in both the pit area and the grandstands.

On the racing card at Fonda on Saturday, June 15 will be the Sunoco Modifieds, the Swagger Factory Apparel 602 Crate Sportsman ($1,000 to win thanks to Eric Orozco Racing), Montgomery County Office for Aging Inc. Limited Sportsman, Algonkin Motel Pro Stocks, and the Trackside Body Works Street Stocks.

In honor of Father’s Day, there will also be Father’s Day giveaways with the racing action set to start at 7:00 p.m.

The Bill Ag Memorial Match race event for the Sunoco Modifieds has a unique format to it every year and was the idea of Dirt Track Digest’s own Mike Mallett, George Smith, GT Smith, and Scott Friers. Different sponsors come on board to support the event, which offers a great payout to the participating drivers.

Last year, Bobby Varin and Tim Fuller were the first two drivers to compete against each other in the event with Fuller taking the victory. One by one after that Fuller disposed of the remaining four other drivers and collected a total of $2424.24 for a total of only 10-laps! Fuller had lane choice for every race except for the last one against Hohenforst but was still able to get out front at the drop of the green flag for the big money event.

Bill Anagnastopulos Jr. presented the winning check to Fuller who had this to say to Mike Mallett in victory lane: “When Josh (Hohenforst) got lane choice for the last race I thought that I was in trouble, I was real concerned because he is fast here at Fonda on a heavy track. This event is a little different, it has a lot of pizzazz, and racing needs more of that.”

The Fifth Annual Bill Ag Memorial Match Race event has a list of eligible drivers, kind of. The top five in the Sunoco Modified point standings are automatically in the Elimination Race with one driver chosen from positions six through 10 in points. There’s just one issue, third place driver in points Stewart Friesen will be unable to compete due to competing in the NASCAR Gander Outdoors Truck Series Race at the Iowa Speedway on Saturday.

The two-lap dash will be done right after Sunoco Modified hot laps, so the elimination draw can be set. Both drivers will receive a $100.00 for the two-lap dash. The loser of the dash could find themselves out of the event but Bill Ag would have loved this. Locked in drivers for the event include Rocky Warner, Bobby Varin, Stewart Friesen who will miss the event due to the Gander Outdoor Truck race in Iowa, Danny Varin, and Dave Constantino.