THE PATRIOT SPRINT TOUR PRESENTS THE EARL HALAQUIST MEMORIAL AT THE FONDA SPEEDWAY SATURDAY MAY 25, 2019 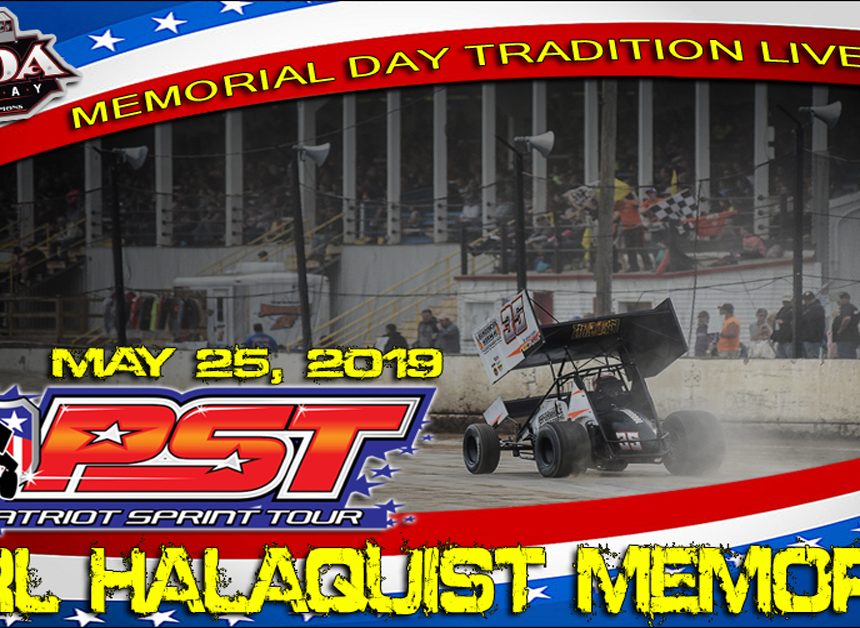 FONDA, NY – Traditions on Memorial Day vary from family to family but may consist of the following: parades, cook outs, and of course Sprint Car Racing at the “Track of Champions” Fonda Speedway!

This Saturday May 25 at Fonda, the A-Verdi Storage Containers Patriot Sprint Tour will be in competition for the Earl Halaquist Memorial event. After a one-season hiatus, the Patriots are back at the Fonda Speedway located in Fonda, NY, which is now under the promotional operation of Brett Deyo. They will head to the Montgomery County fairgrounds for the Earl Halaquist Memorial, an event that pays $3,000 to win and $300 to qualify. Lap money will also awarded.

Also racing at the Fonda Speedway on Saturday, May 25 will be the Sunoco Racing Modifieds, the Swagger Factory Apparel Crate 602 Sportsman, the Montgomery County Office for Aging Inc. Limited Sportsman, the Algonkin Motel Pro Stocks, and the Trackside Body Works Street Stocks with racing starting at 7:00 p.m.

As a special tribute to the Veterans and military, Brendan Gibbons of Gibbons Military Motors will have two of his jeeps on display for the evening. One of the jeeps according to Gibbons will be a 1945 Willys MB, nicknamed “Lil’ Buddy”, which saw service with the US Army in WWII. This jeep was restored by Brendan and Richard Gibbons (WWII veteran) in 2010.

The other jeep that will be on display is a 1942 Willys MB, nicknamed “Dolly.”, which saw service with the United States Marine Corps and US Army during WWII along with postwar service with the US Airforce in Europe. This Jeep was restored in 2011 by Brendan and Richard Gibbons.

Gibbons appears in parades around the local area with his Jeeps, this past week appearing in the Memorial Day parade in Scotia, NY. That evening Gibbons and his friend Brett Mortensen piloted the Jeeps in the parade with Taylor LaPlante also driving the Jeeps during some events.

Sprint car driver Josh Flint, who is a veteran, will also have his #41 Sprint Car at the Fonda Speedway Hall of Fame & Museum at 4:00 p.m. when the museum opens so please stop and see Josh, thank him for his service, and wish him good luck in his racing endeavors in 2019 including Saturday evening at the Fonda Speedway! Sprint cars are cool to look at up close and personal with the huge wing on top of them so here is your chance to get a close up look at the Josh Flint Sprint Car!

Below is a history of the Earl Halaquist Memorial event, which appears on the Patriot Sprint Tour website www.patriotsprinttour.com

Back to that July night at Five Mile Point, Halaquist didn’t win the feature, but he was impressive getting a second-place ﬁnish behind Hal Rettberg. That was only the beginning as the decade that changed the country belonged to the Earl Halaquist/George Nesler duo.

Race Day Information for Saturday, May 25 at the Fonda Speedway: