WARNER WINS ON TRIBUTE TO MOM’S NIGHT AT FONDA 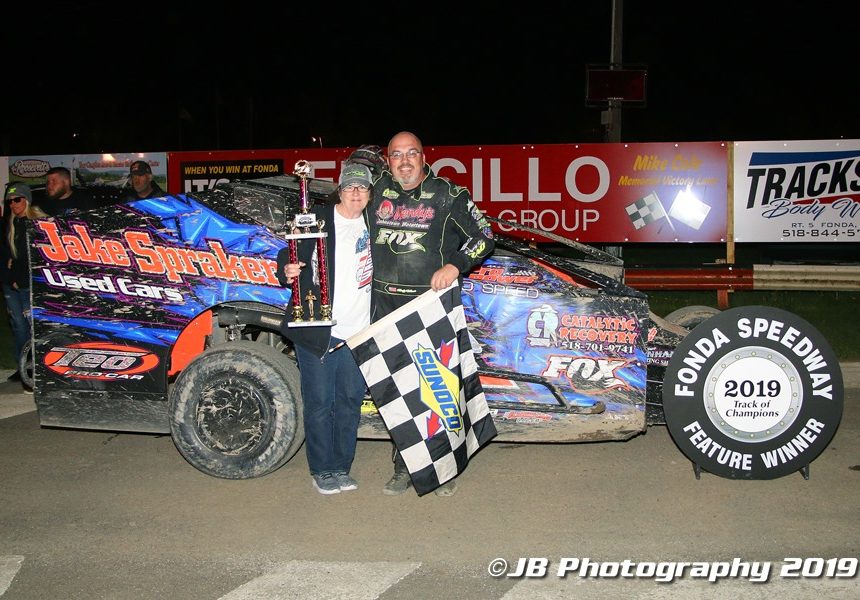 Fonda, NY – As a racer, what better way to celebrate Mother’s Day then with a win and a celebration in victory lane at Fonda with your Mother? Saturday evening, Rocky Warner was able to do just that as he took his second career win in the Sunoco Modified division at the “Track of Champions” in the Jake Spraker Used Cars #1J.

In the Fuccillo Automotive Group, Mike Cole Memorial victory lane afterwards, Warner celebrated with his car owner, his crew, fans, sponsors, and one very important person in his life his mother Deb.

“You had to go there,” Warner said to Melissa Lazzaro after she asked him about how important his Mother is to him. “She is everything to me” a very emotional Warner said.

Stephanie May did a beautiful rendition of the National Anthem to start off the racing program with another large crowd on hand to watch the evenings racing action.

The handicapping system was used for the first time this season putting Steve Akers and Darwin Greene on the front row of the Sunoco Modified feature with Greene taking the early race lead. Modified rookie David Schilling started the event in the sixth position but was on the move early, getting by Willy Decker for the third position on lap five while Greene was out to a straightaway advantage.

At the halfway point in the event, Warner was pressuring Greene for the lead while Decker, Michael Maresca, and Friesen completed the top five. Lap traffic came into play on lap 18 with Greene trying to protect the bottom while Warner raced hard and clean, respecting the leader while putting on a great race for the fans.

Another caution flag was out on lap 20, and another one on the restart with no laps completed, forcing a single file restart situation on the next try. On each lap coming into turn four, Greene would slide up the track slightly, opening up the bottom groove for Warner, with Warner taking advantage of that coming down to complete lap 21 and taking the race lead. Warner pulled away to a half track lead with four laps to go but one final caution came out on lap 26 bringing the field back to him.

After the restart, Warner pulled away while Friesen made a late race move from the fifth position to second with one lap to go. But there was no time to challenge Warner as he pulled away to his second career win at the “Track of Champions” followed in the top five by Friesen, Greene, Decker, and Maresca.

In post-race inspection Greene was disqualified for being light on the scales and was placed 26th in the final finish results.

“This car is like driving a Cadillac,” Warner said in victory lane. “I was trying to time it right going into turn four because Darwin was on top and I was trying to find moisture on the bottom. He had a good car and was protecting his lead like he should have but I knew that I had a good car I just had to take my time.”

The 25-lap Swagger Factory Apparel Crate 602 Sportsman feature began with Kurtis Hohensheldt and Harry Shaffer on the front row with Shaffer the early race leader. JaMike Sowle started the event in the sixth position and on lap two took the second spot away from Hohensheldt with Brian Borst and 13th place starter Tim Hartman Jr. completing the top five.

The only caution flag in the event came out on lap eight and on the restart Sowle was the new race leader with Hartman Jr. now in the second position. Sowle was in lap traffic with five laps to go and that proved to be his downfall as Hartman Jr. went inside of both Sowle and a lap car in turn four on lap 21 to take the race lead.

Hartman Jr. went on to his fifth win in the division at Fonda in the Parillo Services #22 with Sowle, Borst, eighth place starter Cody Clark, and 11th place starter Tony Farone completing the top five.

“I have to thank Mike (Parillo) for the opportunity he gave me in this car,” Hartman Jr, said in victory lane. “We have been working on this car for a couple of weeks and this is its first time out. We had an electrical problem with the car earlier tonight but we got that fixed and the car was definitely good on the slippery track. Tonight my daughter is here and this will be her first victory lane photo so that is very special. Happy Mother’s Day to my Mom and my wife.”

Spencer Rapp led early in the Montgomery County Office for the Aging Limited Sportsman feature but by the time lap one was completed it was outside front row starter Brett Mortensen who had the race lead after getting by Rapp on the outside of turns three and four. Two time feature winner in the division this year EJ McAuliffe started the event in the 12th position and was the fifth place car by the time the lap counter showed lap eight.

Mortensen stayed smooth and steady and led all laps in the caution free event to take his first career win at the “Track of Champions”. Rapp, Brendan Gibbons, McAuliffe, and Alan Hanson completed the top five in the event. In victory lane, Brett Mortensen’s brother Mark and their Mom Bonnie posed for a photo to celebrate Mother’s Day.

“I took my brothers car out in warm-ups earlier this year and hit the wall with it,” Mortensen said after the win. “So I had to buy a car of my own and redeem myself from that day.”

Ivan Joslin led at the start of the 20-lap Algonkin Motel Pro Stock feature from his outside front row starting spot with Jim Normoyle right behind in second. John Roese and Jason Morrison both got by Normoyle for the second and third positions with a five car battle ensuing on lap six for the third position with the cars racing four wide in turns one and two.

Eighth place starter Chuck Dumblewski was part of that battle and was the new third place car with Roese challenging Joslin for the lead on lap eight. At the halfway point in the event Joslin was the race leader followed by Roese, Dumblewski, 10th place starter Josh Coonradt, and 12th place starter Luke Horning.

The one and only caution flag in the event slowed the field on lap 14 and on the restart Coonradt was the new second place car. Joslin and Coonradt were side by side for the lead with four laps to go with Joslin holding on to the lead while 11th place starter Nick Stone moved into the top five. Joslin pulled away in the closing laps leaving four other cars behind to battle for the second position.

At the drop of the checkered flag it was Joslin in the Parillo Services sponsored #49 winning his 10th career feature event in the division at Fonda over Dumblewski, Horning, Coonradt, and Stone.

Jason Samrov led at the start of the 15-lap Trackside Body Works Street Stock feature event with Stephen Young second at the completion of lap one after starting fourth. Young was in the wall in turns one and two on lap two bringing out the caution with two time winner in 2019 Dave Horning Sr. now the new second place car.

Michael Arnold and Horning Sr. swapped the second position a couple of times but by lap 10 with five laps to go it was a two car battle between Samrov and Horning Sr. On the final lap, just as he has done in the last two events, Horning Sr. closed in on the leader and on the inside of turn four coming to the checkered flag he took the lead away from Samrov and went on to his 61st career win in the division.

Ken Hollenbeck led all 12-laps in the Four Cylinder Cruiser feature event for his 44th career win in the division over Cole Lawton, Josh Samrov, John Napoli, and Zach McSpirit.

Next Saturday, May 18 will be Dollar Night with $1 grandstand admission and all divisions in action with a 7:00 p.m. starting time.