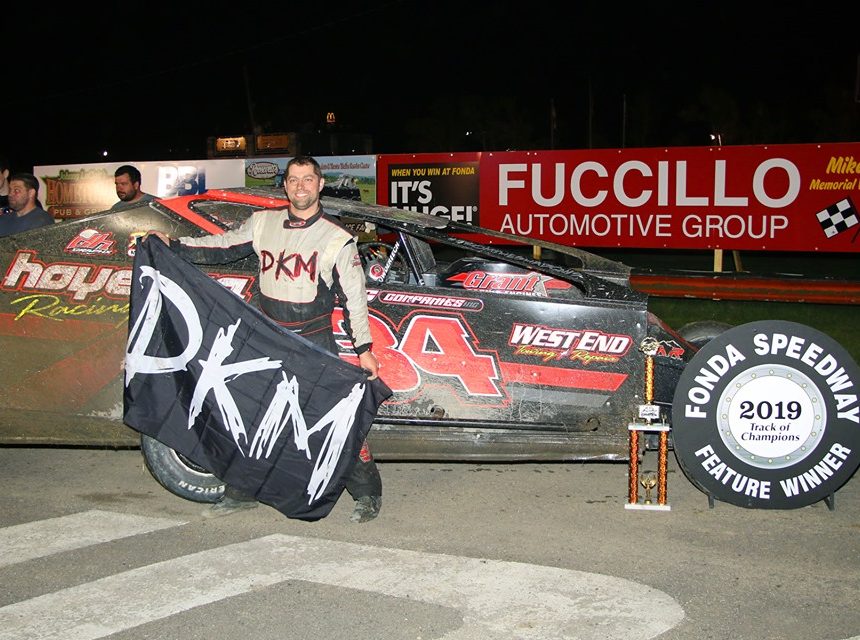 Fonda, NY – The “Black Flag Crew” took over victory lane at the “Track of Champions” Fonda Speedway on Saturday evening as DKM Cyclone drivers Dave Constantino and Adam McAuliffe were victorious in the Sunoco Modified and Swagger Factory Apparel 602 Crate Sportsman divisions respectively. Bob Hilbert Sportswear sponsored the evenings racing activities at Fonda and there was also a benefit for the Regional Animal Shelter which raised a total of $12,534 for the animals!

Constantino took over the ride in the Laudy Hoyenga Motorsports #34 for the 2019 racing season and on week one last Saturday was fast and captured a top five finish. This Saturday Constantino started in the fourth position and was quick to show that he was fast again, taking an early lead and going on to his first career Modified win at Fonda.

Constantino grew up in a racing family with his father John Constantino, who is a Fonda Speedway Hall of Fame driver, racing for many years and actually still racing in the Vintage car that he owns. Also a big part of Dave Constantino’s life was his “extended family” that being Maynard Forrette who lived around the corner from where Dave grew up and who is a big part of the DKM story of how Constantino, Erik Mack, and Kyle Hoffman got started in the race car fabrication business.

In victory lane on Saturday evening, Dave Constantino proudly stood on top of his racecar with a huge “DKM” flag while people in victory lane, many of them wearing “DKM black”, cheered wildly and celebrated Dave’s first career Modified win at Fonda. Before Mimi Lazzaro was able to interview Constantino, Dave gave car owner Laudy Hoyenga a big hug as they both celebrated the victory.

The 30-lap Sunoco Modified feature began with Danny and Bobby Varin on the front row with Danny taking the early race lead at the drop of Joe Kriss’ green flag. Dave Constantino started on the outside row in the fourth position and quickly showed his hand as he was quick on the outside and in the second position as lap one was completed.

On the outside of turn four coming down to complete lap three, Constantino got by Danny Varin for the lead and by lap seven he was already out to a straightway advantage. One lap later Constantino was in lap traffic, trying for numerous laps to get by Willy Decker as Danny and Bobby Varin closed in on his back bumper.

At the halfway point the Varin’s were right up to challenge the leader with David Schilling and Ryan Odasz the fourth and fifth place cars behind the battle for the lead. On lap 16 Constantino finally got by Decker and was able to open up his lead again as the Varin’s raced amongst themselves for the second spot with the two swapping the position with 10 laps to go in the event.

Bobby Varin took over the second position from his son Danny on lap 22 while Constantino had three lap cars and a nice lead at that point. Constantino took the victory and is now the 132nd different driver to win a Modified feature at Fonda in its 68 year history.

Adam McAuliffe and Aaron Burton brought the field to the green flag in the 25-lap Swagger Factory Apparel 602 Crate Sportsman feature with McAuliffe leading the way early on. Seventh place starter Tim Hartman Jr. was the new third place car on lap four after getting by defending track champion Chad Edwards for the position but shortly afterwards brought out the caution as he suffered a flat tire. He was able to pit for a new tire and restart at the rear of the field.

As McAuliffe continued to lead, Tony Farone was the new second place car on lap eight with McAuliffe, Farone, Brian Pessolano, Edwards, and Burton the top five at the halfway point in the event. After a restart on lap 14, Edwards got by two cars into the second position but Farone had a strong car and was back in the runner-up spot by lap 18.

After suffering the flat tire on lap six and restarting at the rear of the field, Hartman Jr. had a fast car and moved to the front quickly, sitting in a top five spot with five laps to go in the event. When the final caution flag in the event flew with two laps to go, Hartman Jr. took over the second position on the restart but McAuliffe was able to capture his ninth career win in the division at Fonda in the Ed McAuliffe Trucking #234 DKM “Cyclone” car.

Hartman Jr., Farone, Edwards, and Pessolano completed the top five in the event.

“I’m glad to be back here in victory lane at Fonda,” McAuliffe said in victory lane. “Brett (Deyo) is doing a great job here this year. Lap cars were a tough deal, I didn’t mean too but I got into one during the feature but sometimes you need to move them out of the way.”

John Young started the Montgomery County Office for the Aging Limited Sportsman feature on the pole and led the first three laps of the event after moving up from the street stock division this year. Fourth place starter EJ McAuliffe took over the lead on lap four on the inside of turn four and led the remaining laps for his second win of the 2019 season and the third of his career in the division over Young, Dave Richer, Tucker O’Connor, and Rich Christman.

The 20-lap Algonkin Motel Pro Stock feature was a good one with two cars dominating the event as they raced for the win. It all began with outside front row starter Nick Stone as the early leader with third place starter Luke Horning the new second place car at the completion of lap one. While racing inside of the leader in turn three on lap four, Horning had to back off to keep from making contact with the leader as they raced side by side for the first of many times in the event.

Stone and Horning were a straightaway ahead of the third place car of David Emigh on lap nine with the top five at the halfway point consisting of Stone, Horning, Emigh, defending track champion Kenny Gates, and Jason Morrison. On lap 13 the yellow flag was out for Gates who was in the tire wall in between turns three and four. He was able to drive away and continue on at the rear of the field.

On the restart, Stone and Horning were side by side for the lead with Stone able to hold on to the spot despite heavy pressure from Horning. On lap 15, on the inside of the backstretch, Horning was able to get by Stone for the lead with two consecutive yellow flags flying on laps 16 and 17, the first one for the third place car of Chuck Dumblewski who spun in turn three and the second for Ivan Joslin who was in the wall in turn one. One of the cautions cost Stone the lead as he was able to get by Horning but with no laps completed after the first caution flag the race was scored back to the last completed lap which meant that Horning was still the race leader.

Horning went on to his 15th career win at Fonda in the Parillo Services #2H and was followed in the top five by Stone, 17th place starter Josh Coonradt, Emigh, and Morrison.

“That yellow flag was a gift from God,” Horning said of the caution on lap 17. “To beat the #27 (Stone) is great, he builds these cars and he will give you room to race so this win definitely means a lot.”

The Trackside Body Works Street Stock feature began with pole position starter Michael Arnold leading the event with Stephen Young in tow. Arnold remained in the lead but behind him sixth place starter Dave Horning Sr. moved past both Jason Samrov and Young for the second position. On the final lap on the inside of turn two Horning Sr. got by Arnold for the lead and went on to his 60th career victory in the division over Arnold, Samrov, Young, and Rob VanAernam.

Next Saturday, May 11 Fonda Speedway will present a “Tribute to Mom’s” with free flowers to the first 100 mothers plus other giveaways. All divisions will be in action including the 4-Cylinder/Cruisers with racing action starting at 7:00 p.m.