SHEPPARD IN THE RIGHT PLACE AT THE RIGHT TIME TO TAKE $8,000 WIN AT FONDA 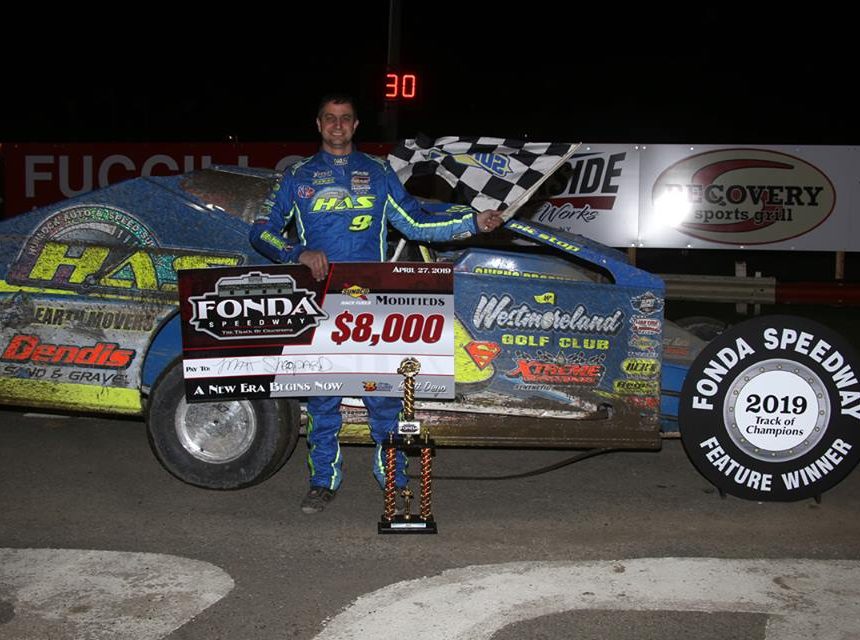 FONDA, NY – Matt Sheppard summed it up the best in the Fuccillo Automotive Group Mike Cole Memorial victory lane at the Fonda Speedway on Saturday after his victory in the 30-lap Sunoco Modified feature event in the HAS sponsored #9S Bicknell car saying: “the 44 car (Stewart Friesen) got caught up in lap traffic and I was in the right place at the right time to take advantage of it”.

The victory was Sheppard’s fourth career win at the “Track of Champions”, the last win coming on 8/10/2016. It was also Sheppard’s second opening night victory at Fonda after also accomplishing that feat back in 2014.

“I started the Matt DeLorenzo era here at Fonda with an opening night win back in 2014, and now I started the Brett Deyo era here with a victory tonight,” Sheppard told Mimi Lazzaro in victory lane.

The new era at Fonda was started on Saturday, with the BD Motorsports LLC promotional team of Brett and Heather Deyo, Jamie and Denise Page, Angela Hanson, and the rest of their staff putting on a great racing program despite the cold temperatures. The quickly run, six division racing program was completed in just short of four hours. The 50/50 was won by Dale Gray of Johnstown who took a victory of his own, taking home the $901 prize.

On “Allegiance Night” at Fonda, the new era welcomed back an “Allegiance” of fans as the covered grandstand was filled just like the good old days of the “Track of Champions”. Fonda, NY Deputy Mayor Tim Healey was on hand for the racing program and stood on victory lane along with Brett Deyo and Jamie Page before the National Anthem saying: “Back in 1968 I watched a blue #43 car here at Fonda racing through turns one and two and that was Richard Petty”. Healey was also a former member of the fire/safety crew at the “Track of Champions.”

Melissa “Mimi” Lazzaro was back singing the National Anthem and doing victory lane interviews. The Biittig’s, Ed and Betty, who are racing historians who have a vast knowledge of the history of the Fonda Speedway were back in the tower watching the action as well, just a great night and a great atmosphere to be a part of for anyone who was there.

The top three finishers in each of the qualifying heat race events redrew for starting positions for their feature event starting positions with Matt DeLorenzo and Danny Johnson starting the 30-lap Sunoco Modified event on the front row with DeLorenzo taking the early lead at the drop of Joe Kriss’ green flag.

On lap two the first of a total of eight caution flags during the event was out for Mike Maresca who came to a stop on the backstretch after spinning his car around coming out of turn two while running sixth. The rest of the field was all still at speed but all were able to get by Maresca’s stopped car except for Josh Hohenforst who made contact with Maresca. Both cars were done at that point in the event.

On the restart, Bobby Varin used the outside starting position to take the lead away from DeLorenzo only to have the caution come out again before any laps were completed handing the lead back to DeLorenzo on the next restart. DeLorenzo took advantage of that and was able to maintain the lead while Dave Constantino got by Varin for the second spot.

While all of that was going on, Matt Sheppard made his way up to the fourth position after starting 11th, getting by Danny Johnson for the spot with eighth place starter Stewart Friesen just behind Johnson in the sixth spot. Friesen got by both Johnson and Sheppard for the fourth position on lap seven, and after another caution two laps later Friesen was in the second positon after getting by both Varin and Constantino with Sheppard now just behind in third.

Friesen was looking for the quick way around the track to close in on the leading car of DeLorenzo, trying the inside line around the track before moving to the outside groove to get around DeLorenzo for the lead in turn four on lap 14. Sheppard also got by DeLorenzo for the second position on lap 17 with Friesen in lap traffic four laps later on lap 21 allowing Sheppard to close in.

Sheppard made the low line work for him and when Friesen tried to go around the outside of the lap car of Elmo Reckner, Reckner got loose with both he and Friesen going high in turn three allowing Sheppard to get by both of them for the race lead. Friesen then showed his displeasure with the lap car of Reckner by getting into the rear of Reckner’s car going into turn four to bring out one final caution, setting up a three lap dash to the finish.

Friesen had his car wound up on the outside of the speedway trying to get around Sheppard, but Sheppard stayed in the low groove which had gotten him to this point in the event and took home the victory over Friesen, DeLorenzo, Varin, and Constantino.

“This car was garbage in the heat race but we threw some stuff at it for the feature and it was rolling pretty good on the bottom,” Sheppard said. “My car was good enough to stay with him (Friesen) so I just kept him in my sights and when he got caught up in lap traffic I was able to get by.”

The 25-lap Swagger Factory Apparel 602 Crate Sportsman feature started with Mark Mortensen and Tyler Thompson on the front row after the luck of the draw put them there with Mortensen taking the lead at the start. By lap three Mortensen held a half straightaway advantage over Thompson with Andrew Buff, Nick Scavia, and Tim Hartman Jr. completing the top five.

Mortensen held a straightaway advantage and was in lap traffic by lap eight, at one point stretching out his advantage to almost six seconds over Thompson. Scavia, seventh place starter Tony Farone, and Hartman Jr. The race stayed clean and green up until lap 22 when Aaron Burton ended up in the backstretch wall after contact by another car. Burton was okay but done for the evening at that point.

Mortensen pulled away from Scavia on the restart only to have the caution come out again before any laps were completed. Mortensen pulled away on this restart as well while Farone made quick work of Scavia and got by him in turn two for the second position. Mortensen was able to maintain his lead to the checkered flag for the $1,000 victory in the Jumpin’ Jack’s Drive-In sponsored #1M DKM Cyclone chassis over Farone, Scavia, Hartman Jr., and Buff.

The win for Mortensen, the 2011 Fonda Speedway 602 Sportsman Track Champion, was the 22nd of his career in the division at Fonda which is second on the all-time win list.

“A good draw definitely helped out tonight and I don’t usually draw very well,” Mortensen said in victory lane. “It put me out front and you are always better off there because you can race wherever you want to on the track.”

EJ McAuliffe started the 15-lap Montgomery County Office for the Aging Limited Sportsman feature in the 10th position and somehow got to the lead by the time lap one was completed, after passing early leader Dylan Eldred. McAuliffe was ahead by a half track at times and went on to his third career win in the division over Rich Christman, Tucker O’Connor, Eldred, and Brendan Gibbons.

“My car was definitely hooked up,” McAuliffe said in victory lane. “On the restarts I just tried to stay calm and not get too excited.”

The Algonkin Motel, $1,000 to win Pro Stock feature started with defending track champion Kenny Gates leading from his number one starting position at the drop of the green flag. Luke Horning started the event in the seventh position and on lap four moved up to the second spot with Chuck Dumblewski in third. Gates was out to a half straightaway lead when the one and only caution came out on lap five for a multi car wreck in turn four.

On the restart, Gates maintained the lead while Horning who restarted on the outside fell all the way back to the seventh position. Sixth place starter Nick Stone was now challenging Dumblewski for the second position, running side by side for the spot allowing Gates to pull away. Gates went on to his 81st career win in the division over Stone, Dumblewski, Justin Knight, and Horning.

In victory lane, Gates welcomed Mimi Lazzaro back to Fonda and said “when I started racing I just wanted to win once when asked about his now all time win list leading 81 career victories”. “These American racer tires were bad fast tonight and we had an advantage because we ran them here before years ago. This chassis is now four years old and took me to a championship the last three years.”

Cliff Haslun led the first two laps of the 12-lap Trackside Body Works Street Stock feature until he got out of shape in turn four and collected Chase Aussicker in the process. Aussicker’s tires dug into the track while he was sideways, causing the car to flip over. Aussicker was not injured but both he and Haslun were done for the evening. Dave Horning Sr. took over the lead and led the remaining laps for his 59th career win in the division which is on top of the all-time win list.

Jason Samrov and Michael Arnold were the only other cars to finish the event finishing second and third.

“This feels awesome,” Horning Sr. said in victory lane. “To get a win in the first race of the year takes the pressure off.”

Ken Hollenbeck led all 12 laps in the 4-Cylinder/Cruiser feature for his all-time win list leading 43rd career win and was followed by Josh Samrov, PJ Bleau, Wayne Russell, and Riley Pedrick. Samrov was disqualified for not reporting to tech moving John Napoli into the top five.

“I am really excited about racing at Fonda this year,” Hollenbeck said in victory lane.

Next Saturday, May 4 Bob Hilbert Sportswear will present Meet & Greet Night with all divisions in action except the 4-Cylinder/Cruisers. There will also be a benefit held for the Regional Animal Shelter. Racing will start at 7:00 p.m.